The Dark Knight Rises—And Asks Us to Rise As Well 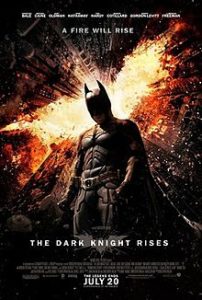 The final film of Christopher Nolan’s outstanding Batman trilogy is not a typical comic-book movie; it is a serious action drama in which a few of the characters happen to wear masks.

The story is epic in scale, involving the life or death of an entire city; the conflicts are intense; and although much of the technology is futuristic, everything about this film feels real. It helps, of course, that the excellently written characters are portrayed by some of the best actors on the planet.

This is an action film for the mind. What makes it so are its profound themes.

The film reminds us that some people are out for destruction for destruction’s sake, even if they offer some pretext for their actions. Whereas this motive is often masked in real life, whether by faulty premises or rationalizations, the film brings it vividly to the fore. And although some people (especially politicians and leftist intellectuals) evade the reality of such evil and claim that those seeking to harm us will leave us alone if only we appease them enough or pay them enough or feel sufficiently sorry for them, Nolan’s film urges us to recognize evil as real and to defeat it.

The film also highlights the dangers of mob rule and class warfare, and implicitly condemns the Occupy Wall Street movement. For instance, at one point, as Gotham descends into the terror of property confiscation and kangaroo courts, one of the minor characters “enjoys” her stolen loot, noting that the house she occupies belongs to “everybody” now, as opposed to those who rightfully own it.

More importantly, the film shows that ordinary people can rise to do great things. Bruce Wayne, himself an ordinary man (albeit a wealthy one), could have sat back, spent his money, and let evil run roughshod over Gotham. Instead, he develops extraordinary integrity and courage and devotes his life to protecting the city he loves. But Wayne’s purpose is not only to protect Gotham himself; it is also to offer people a symbol of hope, so that they too rise up to take courageous, life-serving action. And, inspired by Batman, many do rise to face the challenges before them. For example, an understandably terrified police officer, in the face of extraordinary danger, chooses to uphold his responsibilities and fight rather than relinquish them and flee.

In this film, the Dark Knight not only rises; he invites us to do the same.