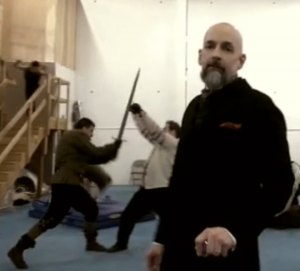 Ladies and gentlemen, computer geeks and warriors, unsheathe your swords.

In an extraordinary fund-raising drive, Subutai Corporation raised $526,125 from 9,023 backers (me included) to finance the creation of a video game called CLANG, a game to be built by swordsmen using a realistic sword-like interface.

No doubt the Kickstarter campaign benefited by the celebrity of science-fiction author Neal Stephenson—who led the drive and who enthusiastically pursues sword fighting—as well as by a series of hilarious and informative promotional videos created by Stephenson and his team.

In one video, Stephenson explains the goals of the game and the reasons for pursuing “crowd funding”:

If this campaign succeeds [and it has] . . . we’ll have enough in the bank to hire the talent we need to produce a simple, playable game that we can build onto. Sure, it would be great to raise tens of millions of dollars and make a huge triple-A, open-world game, but there’s a price you pay for taking lots of funding up front, and that price is loss of creative control. We think that the approach we’re taking here, crowd-funding and building around the kernal that we control, is going to be better.

Stephenson also talked a bit about how working on the game fits with his goals as a novelist:

Subutai Corporation is my attempt to figure out what the future of my craft looks like in a world where fiction gets distributed on electronic devices ten minutes after it’s written, where video games, movies, and graphic novels are produced from shared digital assets using a common tool chain, and in which geek culture is fascinated by huge, long-running franchises describing the arcs of imaginary worlds spanning thousands of years. Where creators can route around the old, broken-down funding models and get production budgets directly via crowd-sourcing.

What’s most interesting to me about this project is that it demonstrates that people are not constrained by narrow-minded “free-rider” calculations, and that people can use technology creatively to solve economic problems—something that Craig Biddle recently addressed in the context of a voluntarily funded, rights-protecting government.

This leads to an additional question. Given that thousands of people voluntarily contributed over a half-million dollars to finance an obscure video game—and this is just one illustration of the widespread practice of voluntary financing—why do we need government to finance the arts, or “public” radio, or aid for the poor, or anything of the sort?

View all articles by Ari Armstrong →
Letter to the Editor
Larry Doby, American HeroScience vs. Environmentalism, Exhibit 372B
Return to Top