Prometheus and the Black Goo of Altruism 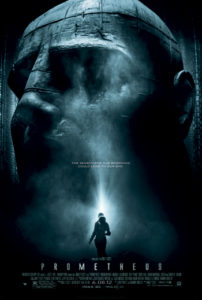 Although Ridley Scott’s film Prometheus is an incoherent mess, it does feature an obvious theme. It glorifies altruism, selfless sacrifice to others.

Children’s author and blogger Adrian Bott explains what’s going on in the opening of the film:

Let's begin with the eponymous titan himself, Prometheus. He was a wise and benevolent entity who created mankind in the first place, forming the first humans from clay. The Gods were more or less okay with that, until Prometheus gave them fire. This was a big no-no, as fire was supposed to be the exclusive property of the Gods. As punishment, Prometheus was chained to a rock and condemned to have his liver ripped out and eaten every day by an eagle. . . .

The ethos of the titan Prometheus is one of willing and necessary sacrifice for life's sake. . . .

Now, consider the opening sequence of Prometheus. We fly over a spectacular vista. . . . A lone Engineer at the top of a waterfall goes through a strange ritual, drinking from a cup of black goo that causes his body to disintegrate into the building blocks of life. We see the fragments of his body falling into the river, twirling and spiralling into DNA helices.

Scott himself explains the significance of this scene:

All he’s doing is acting as a gardener in space. And the plant life, in fact, is the disintegration of himself. If you parallel that idea with other sacrificial elements in history—which are clearly illustrated with the Mayans and the Incas—he would live for one year as a prince, and at the end of that year, he would be taken and donated to the gods in hopes of improving what might happen next year, be it with crops or weather, et cetera.

Bott notices that the film explicitly invokes Christian history and imagery. Scott verifies this connection in answering the question, “Did we do something to make the Engineers hate us?” (The Engineers are the creators of life who, in the end, try to destroy Earth.)

We definitely did. . . . if you look at it as an “our children are misbehaving down there” scenario, there are moments where it looks like we’ve gone out of control, running around with armor and skirts, which of course would be the Roman Empire. And they were given a long run. A thousand years before their disintegration actually started to happen. And you can say, “Let’s send down one more of our emissaries to see if he can stop it.” Guess what? They crucified him.

Prometheus, then, contrasts the sacrificial life-givers (the Engineers and Jesus) with the sacrificing life-takers (the Romans who crucified Jesus). In the film, the character who epitomizes the sacrificer of others is Peter Weyland, who, as Bott explains, endangers all of humanity in his quest for eternal life via the Engineers’ black goo. But the black goo “evidently models its behaviour on the user's mental state,” Bott notes, and so, posits the film, human selfishness corrupts it.

First notice that the altruism of the life-creating Engineers “works” only because of an inexplicable concoction of magical black goo—something that in reality doesn’t exist and thus has no bearing on human life. It is telling that Scott compares the action of the black goo to the ancient “donation” of princes to the gods—that is, human sacrifice in the form of brutal murder.

Next, notice that Prometheus sees the two basic alternatives as self-sacrificial, life-giving selflessness, and other-sacrificing, life-harming selfishness. This ignores the possibility of a rationally self-interested person who (as Ayn Rand formulates the matter) neither sacrifices himself to others nor others to himself.

Rational selfishness rejects human sacrifice in all its forms, and it is what truly sustains human life. Unlike the Engineers, human parents do not normally die giving birth—thankfully, doctors in our industrial age have radically reduced the rate of mortality during birth. Instead, normal parents love their children dearly and hold them as supremely high values. Yes, loving parents will give up some things (including some restful nights and some money) for something they value more—their children’s well-being—but such actions are not sacrifices; they are trading what the parents value less for what the parents value more. As adults, humans survive and thrive in a social context to the extent that they interact with others on a voluntary basis, trading value for value.

Ayn Rand too drew on the legend of Prometheus for her novelette Anthem, first published in 1938. The hero, who escapes a collectivist society with his beloved, chooses for himself the name Prometheus, in honor of the legend: “He took the light of the gods and he brought it to men, and he taught men to be gods. And he suffered for his deeds as all bearers of light must suffer.”

Rand’s point, though, is not that suffering is inherent in life-giving actions, but that, historically, light-bearers have been unjustly tormented. The goal of the new Prometheus is to free mankind from such sacrifice:

And the day will come when I shall break all the chains of the earth, and raze the cities of the enslaved, and my home will become the capital of a world where each man will be free to exist for his own sake.

Those of us who love life must reject the false choice of self-sacrifice or other-sacrifice, and embrace Rand’s vision of a Prometheus who repudiates human sacrifice in all its forms, calling for rights-respecting, rational selfishness.

View all articles by Ari Armstrong →
ObamaCare Tax: A Sophistic Assault on the Rule of LawChina’s One-Child Policy Illustrates Rights-Violating Horror of Collectivism
Return to Top