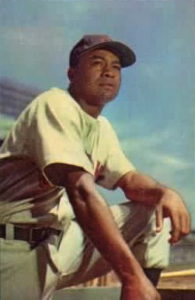 The famous Robinson is rightly considered an American hero. But there was another 1947 black hero who, unfortunately, was historically overshadowed by Robinson—but shouldn’t have been—Larry Doby. The same year Robinson broke into the National League, Cleveland Indians owner Bill Veeck signed Doby, who played his first game on July 5, 1947, breaking the American League’s color barrier.

Historians never really got it. [Doby] was the second African-American to play in the majors, the first in the American League. But after Jackie Robinson broke the color barrier with the Dodgers earlier that season, revisionists would have you believe it was all over.

Doby came to Cleveland six weeks after Jackie had come to Brooklyn. But unlike Jackie, he remained alone for a long, long time. The American League, in contravention to its very name, integrated with the speed of a herniated inchworm.

“Doby,” recalls Izenberg, “told me about the moment the manager, Lou Boudreau, who didn’t want him, introduced him to the players who wanted him even less.” As Doby told Izenberg:

“I walked down that line stuck out my hand, and very few hands came back in return. Most of the ones that did were cold-fish handshakes, along with a look that said, ‘You don’t belong here.’

“Now, I couldn’t believe how this was. I put on my uniform, and I went out on the field to warm up, but nobody wanted to warm up with me. I had never been so alone in my life. I stood there alone in front of the dugout for five minutes. Then Joe Gordon, the second baseman who would become my friend, came up to me and asked, ‘Hey, rookie, you gonna just stand there or do you want to throw a little?’”

Fortunately, Doby has recently gotten some well-deserved official recognition, albeit posthumously. On July 5, 2012, which was the 65th anniversary of his breaking the American League color barrier, the Cleveland Indians, along with the city of Cleveland, commemorated Doby by renaming Eagle Avenue, which runs near its major league baseball stadium, “Larry Doby Way.” And the US Postal Service is dedicating a stamp in his honor.

This kind of personal achievement and cultural progress is a testament to the power of courage and reason, and to the ultimate impotence of ignorance and bigotry. All it took to set this change in motion was two rational, courageous individuals—Veeck and Doby—free to act on their judgment. Veeck signed Doby, Doby took the field, and the rest, as they say, is history.

Hats off to Bill Veeck and, especially, to Larry Doby—a true American Hero.

View all articles by Michael A. LaFerrara →
Letter to the Editor
Gutenberg the Geek and “Patron Saint of Silicon Valley”Sword Enthusiasts Kickstart Clang with Cool Half-Mil
Return to Top