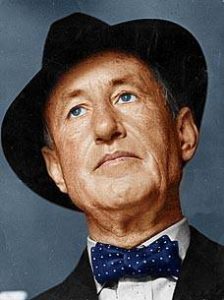 Before writing a series of books on the exploits of British spy James Bond (aka 007), Ian Fleming served in Britain’s navy during World War II.

As part of his job as lieutenant-commander in naval Intelligence, Fleming developed various plans to foil the Nazis in their aspirations to take over and enslave Europe. Here we see early glimpses of Fleming’s novel mind at work.

Consider, for example, the following plan, known as “Operation Ruthless,” that Sinclair McKay recounts in a forthcoming book titled The Secret Lives of Codebreakers:

[This plan] involved the use of “an air-worthy German bomber” to be obtained from the Air Ministry—a “tough crew of five, including a pilot, WT operator, and word-perfect German speaker. Dress them in German Air Force uniforms, add blood and bandages to suit.”

The plan was to “crash the plane in the Channel after making SOS to rescue service" and, justifying the operation name, "once aboard rescue boat, shoot German crew, dump overboard, bring rescue boat back to English port.”

What was so valuable about a rescue boat? The hope was that there would be an Enigma machine onboard, which the Nazis used for communication, and that with this in hand, some of Britain’s top minds could decipher the messages sent to and from German High Command.

Not only did Fleming come up with this idea; he also, remarkably, volunteered for the mission. Unfortunately, reports McKay, this plan was never put into practice, because weather conditions and other circumstances did not permit it.

(McKay tells us that, on hearing the plan would not be enacted, Alan Turing and Peter Twinn, who were working nonstop on breaking into Enigma via the creation of “bombe” machines that would lead to our modern computers, felt like “undertakers cheated of a nice corpse.”)

But Fleming developed many other plans, some as ingenious as this, and several were implemented toward the victory of Britain and the ultimate defeat of Nazi Germany.

(For a recounting of some of Fleming’s other plans, see Operation Mincemeat: How a Dead Man and a Bizarre Plan Fooled the Nazis and Assured an Allied Victory, which I reviewed in the Summer 2011 issue of TOS.)

View all articles by Daniel Wahl →
Government Spending Keeps Growing, and Growing . . .Thoughts on the Aurora Murders and Armed Citizens
Return to Top