Higgs Boson Research: Testament to the Power—or the Crudeness—of the Human Mind? 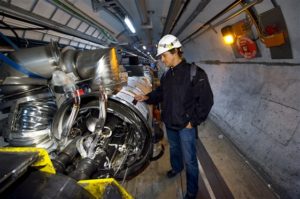 The recent announcement that scientists found evidence consistent with the existence of the Higgs boson (a type of particle thought to give mass to other particles) is a testament to the efficacy of the human mind to discover the nature of reality. Why, then, do some describe the discovery in the language of mystics or claim it shows the feebleness of human reason?

Physicist Leon Lederman first called the Higgs boson the “God particle,” and now that phrase shows up in practically every media account of the discovery. But the particle, should continuing research demonstrate definitively that it exists, is not some mystical, supernatural force, but rather a part of the natural world, governed by natural laws. People study it, not by praying or receiving mystical “insight,” but by observing reality and drawing logical conclusions based on those observations.

Thankfully, one of the lead scientists behind the work, Fabiola Gianotti, did not thank God for the discovery or pretend the particle is mystical. Instead he said, “Thanks, nature!”

But at least scientists who loosely refer to the Higgs boson as the “God particle” do not really mean it has anything to do with a supernatural man in the sky. When journalist Robert Wright proclaims in The Atlantic that the discovery—because difficult to understand—demonstrates that “the human brain . . . is, in the grand scheme of things, a pretty crude instrument,” he means to be taken literally and seriously.

Wright thus ignores the heroic thought and achievement of the thousands of scientists involved in creating the collider and mining the data it offers, and he disparages the human capacity of reason as such.

No doubt the theory behind the Higgs boson is complex and largely beyond the understanding of many laymen, myself included. But that is the case with any new scientific discovery. When Galileo described the earth’s orbit around the sun, when Antonie Van Leeuwenhoek observed microorganisms, when Newton described the nature of the force holding us on the ground and keeping celestial bodies in orbit, when Benjamin Franklin explained the relationship between lightning and electricity, these discoveries too seemed strange and incomprehensible to many laymen. But, far from showing that “the human brain . . . [is] a pretty crude instrument,” these advances demonstrated the glorious power of the human mind. The same can be said of the research revolving around the Higgs boson.

Consider the magnificence of the collider itself (putting aside for now issues of how it was funded). A release from the Weizmann Institute explains:

In the effort to discover the Higgs boson, unify the fundamental forces and understand the origin of mass in the universe, scientists built the world's largest machine: a particle accelerator nestled in a 27-km-long circular tunnel, 100 meters beneath the border between France and Switzerland, in the European particle physics laboratory, CERN [the European Center for Nuclear Research], near Geneva.

This accelerator, called LHC (Large Hadron Collider), accelerates beams of protons up to 99.999998% the speed of light. According to the theory of relativity, this increases their mass by 7,500 times that of their normal resting mass.

The accelerator aims the beams straight at each other, causing collisions that release so much energy, the protons themselves explode.

What is crude here: Is it the brains capable of conceiving and producing such a machine, or is it the brains that refuse to recognize the power of the human mind on display in such advances?

We who recognize the awesome power of the human mind can add a second, and more important, word of thanks to join that of Gianotti: “Thanks, men of the mind!”