Gutenberg the Geek and "Patron Saint of Silicon Valley" 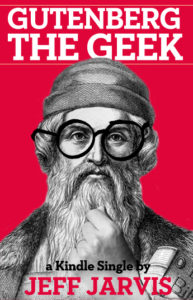 Most children, notes Jeff Jarvis at the start of Gutenberg the Geek, learn of Johannes Gutenberg as “the hero who brought them the miracle of the book.” But is this an accurate depiction of the man and his work?

In this short, twenty-page Kindle Single, Jarvis provides readers with all the information they need to answer that question and to integrate this knowledge of the past with observations in the present.

For example, Jarvis sees Gutenberg as “the world’s first technology entrepreneur,” who “faced similar challenges [to today’s startups] and grappled with apparently timeless business dynamics.” He says that Gutenberg “operated in a climate of disruption and, like his entrepreneurial descendants, caused profound change of his own.” And, because of all this, writes Jarvis, Gutenberg should “be seen as the patron saint of Silicon Valley, for he used technology to create an industry—perhaps the genesis of industrialization itself—and to improve his world.”

Jarvis regards Gutenberg as a hero and often compares him to Steve Jobs. Why does he admire these men? Because, he says, they “accomplished greatness through trial and error, vision, and determination.”

Jarvis notes that “Gutenberg’s key invention . . . was the development of his adjustable, handheld mold made of iron and wood, which allowed his type foundry to quickly and efficiently make letters of exact measurements so they would form lines of text that were even and consistent in three dimensions.” He also notes Gutenberg’s attention to minute details in his pursuit of excellence and profit. For example:

On the basis of such facts, and contrary to what many of us were taught, Jarvis concludes that Gutenberg’s achievement was no miracle and “no overnight invention.” Rather, explains Jarvis employing a quote from Albert Kapr, Gutenberg’s achievement was “a creative process which lasted from about 1437 to 1455, a process which had its setbacks, periods of stagnation and a succession of fresh problems to solve.”

Unfortunately, Jarvis includes in this otherwise gem of an ebook an appeal to keep the internet “free”—by which he means free not only “from the control of governments” but also from the alleged “control” of “corporations.” Fortunately, he spends only three paragraphs on this control-of-corporations nonsense, so it doesn’t detract too terribly from the main value of Gutenberg the Geek.

If you enjoy seeing a true hero at work, not just as an inventor but also as an entrepreneur—and being granted great respect on that eminently worthy basis alone—download this ebook and bask in the good.