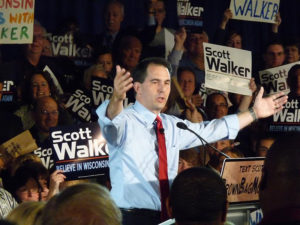 First—horror of horrors—Walker and the legislature required government employees to pay for part of their own pensions and health care, as most private-sector workers do.

While the left condemns Walker’s reforms as a violation of so-called “union rights,” in fact government employees have no right to gouge taxpayers. Bargaining is a right only in the context of a free market in which parties reach an agreement by means of voluntarily consent—not when government employees “collectively bargain” to unilaterally loot others who never consented. The only actual rights at issue are the rights of Wisconsin residents to be free from coercion and to keep and spend their wealth as they see fit.

That Walker challenged the unions, in Wisconsin of all places, and won—not just once but twice—is a significant victory for everyone fed up with unions looting taxpayers.

View all articles by Ari Armstrong →
Hats Off to McDonald’s and Coca-Cola for Protesting Soda BanSAT Sponsor Caves to Egalitarians, Throws Smartest Teens Under Bus
Return to Top