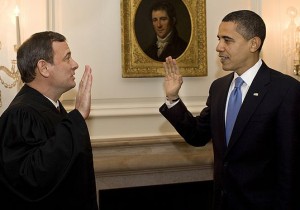 In a 5-4 decision, the Supreme Court upheld the heart of ObamaCare: the “individual mandate” forcing people to purchase government-approved health insurance starting in 2014.

Beyond the constitutional issues, this decision offers two major lessons, one political, the other, moral.

The political lesson is that “ObamaCare,” while spearheaded by the president, is not the product of “liberals” only. Conservatives played a significant role in paving the way to the legislation and in today’s court decision. Chief Justice John Roberts, appointed by George W. Bush, wrote the majority opinion. And, as Paul Hsieh explains, Mitt Romney, now the Republican candidate for president, spearheaded the individual mandate in Massachusetts, providing the model for ObamaCare.

The Patient Protection and Affordable Care Act, although often called “ObamaCare,” did not spring fully formed from the mind of Obama; rather, it is the culmination of decades of federal intervention in health care. As but one example, recall that Bush signed the Medicare Prescription Drug, Improvement, and Modernization Act, radically expanding welfare for health care. (For other aspects of this history, see “Moral Health Care vs. ‘Universal Health Care.”) 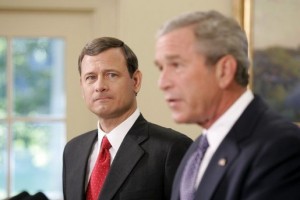 The moral lesson is that altruism—the notion that individuals must self-sacrificially serve others—inexorably leads to collectivism in politics. The Supreme Court’s decision summarizes the workings of ObamaCare:

One key provision is the individual mandate, which requires most Americans to maintain “minimum essential” health insurance coverage. For individuals who are not exempt, and who do not receive health insurance through an employer or government program, the means of satisfying the requirement is to purchase insurance from a private company. Beginning in 2014, those who do not comply with the mandate must make a “[s]hared responsibility payment” to the Federal Government. [Citations omitted]

The heart of ObamaCare is the notion that individuals have a “duty” to “share responsibility” in financing the health care of others—and that they therefore must be forced to do so. Essentially, ObamaCare turns health insurance into a gigantic wealth-transfer scheme, in which young and healthy workers are forced to buy expensive “insurance” that in fact serves to subsidize the health expenses of others.

Contrast the “shared responsibility”—that is, forced collectivism—of ObamaCare with a system that protects individual rights. When the government protects rather than violates rights, each person may purchase health insurance, or not, in accordance with his own circumstances and his own judgment. In a capitalist system (which is not what we have today in the realm of health insurance), insurers compete on price and performance, and they and their clients negotiate mutually agreeable terms. Each person then bears the fruit and responsibility of his decisions, paying for health services through his chosen insurance program, or out of pocket, or with the help of any people or charities that may wish to assist him.

“Shared responsibility” is a euphemism for forced sacrifice. We who recognize the evil of ObamaCare must defuse this euphemism by calling a spade a spade—by calling forced altruism, forced altruism. Let no one evade the actual meaning of this phrase—or the evil of those who choose to evade it. This evasion and its consequences are anti-America, anti-liberty, anti-health, anti-life.