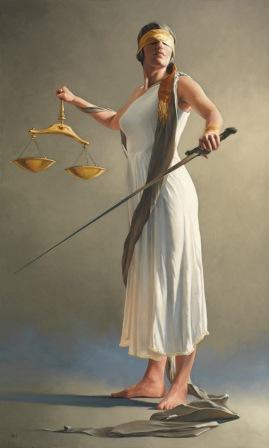 After interviewing Bryan Larsen for the Summer issue if TOS, I reread my favorite part of Ayn Rand’s Atlas Shrugged, the scene in which Ragnar Danneskjold meets Hank Rearden on a road at night and hands him a bar of gold, returning some of the money that the government has stolen from Rearden over the years.

Their conversation begins, “I should like to speak to you, Mr. Rearden.” “Go ahead,” replies Rearden, “provided you don’t intend to ask me for help or money.” Ragnar proceeds to explain that he’s not here to ask for money but to return it. The following excerpt from later in the exchange pairs nicely with Mr. Larsen’s painting to the right, Justice.

“I thought that I had seen everything one could see and that there was nothing I could not stand seeing. But when they took Rearden Metal away from you, it was too much, even for me. I know that you don’t need this gold at present. What you need is the justice which it represents, and the knowledge that there are men who care for justice.”

Struggling not to give in to an emotion which he felt rising through his bewilderment, past all his doubts, Rearden tried to study the man’s face, searching for some clue to help him understand. But the face had no expression; it had not changed once while speaking; it looked as if the man had lost the capacity to feel long ago, and what remained of him were only features that seemed implacable and dead. With a shudder of astonishment, Rearden found himself thinking that it was not the face of a man, but of an avenging angel.

“Much more than you have reason to suspect. And I have a friend to whom you mean much more than you will ever learn. He would have given anything to stand by you today. But he can’t come to you. So I came in his place.”

“I prefer not to name him.”

“Did you say that you’ve spent a long time collecting this money for me?”

“I have collected much more than this.” He pointed at the gold. “I am holding it in your name and I will turn it over to you when the time comes. This is only a sample, as proof that it does exist. And if you reach the day when you find yourself robbed of the last of your fortune, I want you to remember that you have a large bank account waiting for you.”

“If you try to think of all the money that has been taken from you by force, you will know that your account represents a considerable sum.”

“How did you collect it? Where did this gold come from?”

“It was taken from those who robbed you.”

Rearden looked at him for a long, still moment, then let the gold fall out of his hands.

Danneskjold’s eyes did not follow it to the ground, but remained fixed on Rearden with no change of expression. “Would you rather I were a law-abiding citizen, Mr. Rearden? If so, which law should I abide by? Directive 10-289?”

“Ragnar Danneskjold…” said Rearden, as if he were seeing the whole of the past decade, as if he were looking at the enormity of a crime spread through ten years and held within two words.

“Look more carefully, Mr. Rearden. There are only two modes of living left to us today: to be a looter who robs disarmed victims or to be a victim who works for the benefit of his own despoilers. I did not choose to be either.”

“You chose to live by means of force, like the rest of them.”

“Yes—openly. Honestly, if you will. I do not rob men who are tied and gagged, I do not demand that my victims help me, I do not tell them that I am acting for their own good. I stake my life in every encounter with men, and they have a chance to match their guns and their brains against mine in fair battle. Fair? It’s I against the organized strength, the guns, the planes, the battleships of five continents. If it’s a moral judgment that you wish to pronounce, Mr. Rearden, then who is the man of higher morality: I or Wesley Mouch?”

“I have no answer to give you,” said Rearden, his voice low.

“But what sort of life have you chosen? To what purpose are you giving your mind?”