ObamaCare Tax: A Sophistic Assault on the Rule of Law 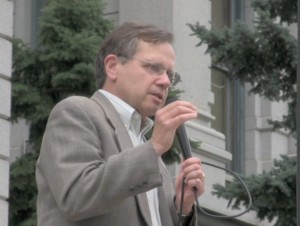 Rob Natelson, who taught law for 30 years and wrote The Original Constitution, blasted the Supreme Court’s decision upholding the ObamaCare insurance mandate under the congressional taxing authority. Although I do not always agree with Natelson’s views on political matters, his comments here are spot on.

When it takes effect in 2014, the mandate will force individuals who do not purchase government-controlled health “insurance”—policies that actually serve to transfer wealth from young and healthy workers to those with high medical costs—to pay a special penalty or tax to the IRS.

First: The court fails to understand the Constitution’s line of distinction between those exactions that qualify as taxes and those that are regulatory in nature. That line was critical to the Founding Generation—in fact, it was a basis for the American Revolution.

In Founding-Era parlance a “tax” is a measure adopted primarily for the production of revenue—that is, to raise funds “to pay the Debts and provide for the Common Defence and general Welfare of the United States.” While it is true that the Founders recognized that a bona fide revenue measure could serve the subsidiary goal of influencing behavior, the principal purpose had to be financial for it to qualify as a tax.

On the other hand, an exaction imposed primarily to regulate behavior (such as the [Patient Protection and Affordable Care Act’s] penalty for not buying insurance) is a regulation of commerce, not a tax, even if it might raise a small amount of revenue. As such, it is valid only if within the scope of the Commerce Power.

That the court misunderstood the distinction is clear from its statement that “[T]axes that seek to influence conduct are nothing new. Some of our earliest federal taxes sought to deter the purchase of imported manufactured goods. . . . ” If the Court was referring to prohibitory tariffs, then it failed to recognize that the Founders considered them regulations of foreign commerce, not taxes.

Chief Justice John Roberts ignored this distinction, opting instead to contort the meaning of both the ObamaCare law and the Constitution:

The most straightforward reading of the individual mandate is that it commands individuals to purchase insurance. But, for the reasons explained, the Commerce Clause does not give Congress that power. It is therefore necessary to turn to the Government’s alternative argument: that the mandate may be upheld as within Congress’s power to “lay and collect Taxes.” In pressing its taxing power argument, the Government asks the Court to view the mandate as imposing a tax on those who do not buy that product. Because “every reasonable construction must be resorted to, in order to save a statute from unconstitutionality,” the question is whether it is “fairly possible” to interpret the mandate as imposing such a tax. [Citations omitted]

It is “fairly possible” to count the mandate as a constitutional tax only by obliterating the meaning and purpose of the U.S. Constitution.

The second reason that the ObamaCare tax violates the constitution is that it is a direct tax. Natelson explains:

The court failed to recognize that even if the penalty were a tax it would be a “direct” tax, and therefore subject to apportionment among the states.

My book, The Original Constitution: What It Actually Said and Meant (2d ed., 2011), pp. 159-61, contains what may be the most complete compendium of Founding-Era sources on the distinction between direct and indirect taxes. While there were some exceptions (for example, although taxes on ownership of capital and household goods were direct, excises on ownership of luxury goods were indirect) the usual line of distinction was that direct taxes were imposed on status, while indirect taxes were imposed on transactions. A tax that one must pay despite doing nothing is the quintessential direct tax.

To briefly review, Article I, Section 9 of the Constitution states, “No Capitation, or other direct, Tax shall be laid, unless in Proportion to the Census or enumeration herein before directed to be taken.” Of course this was modified by the Sixteenth Amendment, but only with respect to income taxes.

Thankfully, Natelson contributed to amicus briefs on the necessary and proper clause and the Medicaid mandate—and the court took his side on both of those issues. (See Dave Kopel’s description of the ruling’s implications for Medicaid.) Tragically, the court ignored Natelson’s work on the taxing authority.

In a June 29 speech in Denver, Natelson perfectly described the court’s “reasoning” as sophistry:

As someone who’s been a lawyer for many years, and an admirer of the Supreme Court despite its many faults, I’m sort of ashamed today. During the Founding era, there was a very common statement . . . about sophism, or sophistry. . . . The Greek philosophers used to go from town to town and show off their rhetorical skills. They could “prove” that black was white, or that you were a cow, or that your wife was a man. . . . And then they could turn around and use their rhetorical devices to prove exactly the opposite. That’s sophistry, the facile, misleading, deceptive use of language to advance a proposition that is untenable on its face. And that’s what we saw in the parts of the Supreme Court opinion that tried to uphold ObamaCare.

Americans must identify and reject the court’s sophistry as sophistry. We must demand that politicians, judges, and our fellow citizens uphold reason, constitutional liberty, and the rule of law.