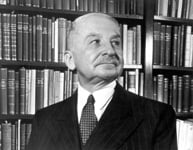 In just two paragraphs, Austrian economist Ludwig von Mises corrects both conservatives and libertarians regarding the proper nature of government.

A famous, very often quoted phrase says: “That government is best, which governs least.” I do not believe this to be a correct description of the functions of a good government. Government ought to do all the things for which it is needed and for which it was established. Government ought to protect the individuals within the country against the violent and fraudulent attacks of gangsters, and it should defend the country against foreign enemies. These are the functions of government within a free system, within the system of the market economy.

Whereas many libertarians oppose government, Mises argues that government is necessary and that a proper government performs certain functions and only those functions:

People who do not agree with [my conception] of the functions of government may say: “This man hates the government.” Nothing could be farther from the truth. If I should say that gasoline is a very useful liquid, useful for many purposes, but that I would nevertheless not drink gasoline because I think that would not be the right use for it, I am not an enemy of gasoline, and I do not hate gasoline. I only say that gasoline is very useful for certain purposes, but not fit for other purposes. If I say it is the government’s duty to arrest murderers and other criminals, but not its duty to run the railroads or to spend money for useless things, then I do not hate the government by declaring that it is fit to do certain things but not fit to do other things.

A proper government serves the function of protecting individual rights by apprehending criminals, stopping foreign aggressors, and running the courts. The proper size of government is whatever size is required to perform its proper functions. We should advocate neither small government (at least not as an essential), nor big government, nor no government, but rather a government that ably does the things necessary to protect rights and that does only those things.