Hey “Liberals”: Obama Has Nothing On Your Should-be Hero Bush 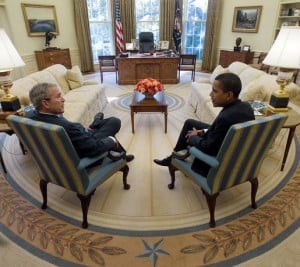 But what Thiesson dubbed the “Obama-Bush Doctrine” is just an indication of the likeness of these two presidents. If liberals were to take an objective look at the Bush presidency, they would have to adore him as much as they adore Obama. Consider the parallels in the following areas.

I could go on, but you get the idea.

If “liberals” love Obama, they should rethink their hatred of Bush. He was their main man first.

View all articles by Michael A. LaFerrara →
Gladwell & Co.’s Monstrous Injustice Against BusinessmenThe Morality of Unequal Pay for Unequal Work
Return to Top