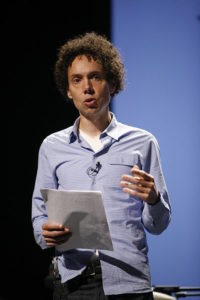 What explains the pervasive hostility toward productive entrepreneurs and business executives in our culture? Consider the following illustrations:

Behind such attacks on business leaders lies the vicious premise that there is something morally wrong with the act of earning a profit by producing goods and services and selling them to willing customers—and the more the profit earned, the greater the presumed immorality.

Consider, as one recent example (of countless examples), Malcolm Gladwell’s comments about businessmen. He predicted that Steve Jobs will be forgotten to history, but that Bill Gates will be remembered—not for creating one of the most innovating computer companies in history, but “for his charitable work” (nevermind the productive activity that made such charity possible).

According to Gladwell, entrepreneurs “are not moral leaders” and “If they were moral leaders they wouldn't be great businessmen. So when a businessman is a great moral leader, it is because they [sic] have maintained their conscience separately from their operations.”

Gladwell’s breathtaking bigotry against entrepreneurs and businessmen presumes that these great men and women are immoral because and to the extent that they produce the goods and services on which our lives depend. And yet such production—of automobiles and airplanes, books and computers, houses and washing machines, natural gas and furnaces, lettuce and eggs, and innumerable other goods—depends fundamentally on practicing moral virtues from thinking to producing to trading to honoring contracts and serving customers.

Ayn Rand aptly summarized the bigotry against and persecution of business leaders in an essay for Capitalism: The Unknown Ideal:

If your answer is “yes”—then ask yourself what sort of monstrous injustice you are condoning, supporting, or perpetrating. That group is the American businessmen.

View all articles by Ari Armstrong →
Laws Against Human Life and the Heroes Who Fight ThemHey “Liberals”: Obama Has Nothing On Your Should-be Hero Bush
Return to Top