For Genuine Economic Recovery, Ask “What Would Mises Do?” 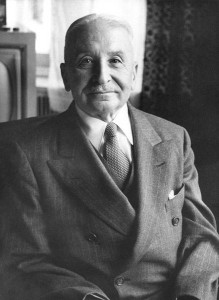 On “public” radio Wednesday, yet another financial guru was advising Europe to follow the lead of the United States: Bail out troubled banks (such as those of Spain) and forcibly transfer more wealth to cover high debt (as persists in Italy).

Coincidentally, the same evening I read a passage by Ludwig von Mises, the great Austrian economist who eventually settled in New York, transcribed from lectures he delivered in Argentina in 1959. Mises’s advice is as timely now as it was then:

Mises noted that the usual alternative to financing government spending through taxation is to finance it through inflation (government fabrication of fiat money). Such a policy, he explained, is disastrous, the economic chicanery of Lord Keynes notwithstanding, for it enables the government to go further into debt while devaluing the currency in the marketplace. Fortunately, he argued, it is a policy that can be reversed:

Inflation is a policy. And a policy can be changed. Therefore, there is no reason to give in to inflation. If one regards inflation as an evil, then one has to stop inflating. One has to balance the budget of the government. Of course, public opinion must support this; the intellectuals must help the people to understand. Given the support of public opinion, it is certainly possible for the people’s elected representatives to abandon the policy of inflation.

Obviously most of today’s Argentines have forgotten or ignored Mises’s warnings; annual inflation in that nation proceeds at around 25 percent. How the United States handles its debt of nearly $16 trillion (not to mention its unfunded “entitlement” liabilities) remains to be seen.

If Americans want genuine economic recovery, rather than mountains of government debt and dollars worth dimes, they would do well to ask “What Would Mises Do?”