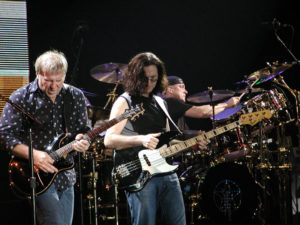 Rush’s raw 1974 self-titled album, written before lyricist and drummer Neil Peart joined the band, features anything but subtle lyrics, yet one of the lines from the very first song in some ways summarizes Rush’s body of work: “I’m finding my way back home.”

Rush—a “progressive rock” trio featuring Peart, guitarist Alex Lifeson, and bassist and vocalist Geddy Lee—has, since that first hard-rock album, tried out a variety of sounds ranging from synthesizer keyboards to reggae beats (and even a bit of rap), but always the band brings these elements back home to a distinctive Rush sound featuring spirited yet complex compositions and virtuoso performances.

With its just-released 20th studio album, Clockwork Angels, Rush depicts a new “steampunk” universe, employs some new sounds and instruments, and for the first time creates a concept album. That said, Rush sounds more at home with its music here than it has perhaps since Moving Pictures from 1981 (although I for one love the intervening albums as well).

The members of the band hit for the fence with this new album. Peart said, “I intend it to be my highest achievement lyrically and drumming wise.” Lee, describing the band’s “drive to get better,” said:

We’re looking to write the perfect song, the perfect album. . . . I feel that this album that’s coming out is as close as we’ve gotten to doing exactly what we set out to do. And there are moments on this record I think that I’ve been trying to accomplish, as a writer, my whole life.

In terms of sound, this album features Rush at its hard-driving best, dominated by the ten combined strings of Lifeson and Lee and the aggressive drumming of Peart. Yet some of the hardest songs, such as “Caravan,” and “BU2B,” soar into some soulful, serene moments. In contrast, “Headlong Flight” is powered almost from beginning to end by adrenaline-fueled bass. Quieter songs feature strings or piano performed by outside artists. The closing song, “The Garden,” combines strings with some nice acoustic work from Lifeson; it is one of the band’s softest and most reflective pieces to date.

In terms of lyrical themes, the album features a hero who, as a release from the band summarizes, embarks on a fantastical journey, confronting “lost cities, pirates, anarchists, an exotic carnival, and a rigid Watchmaker who imposes precision on every aspect of daily life.” The setting, as the notes in the album booklet describe it, is “another timeline” with soaring “steamliners”; a religion of sorts, glorifying the Watchmaker; and a “coldfire for power and light” distributed by “alchemist-priests.” Musically, the songs are distinct; lyrically, they are loosely connected in that they reflect the memories of a man who pursues adventures and enlightenment in this strange world.

Though the protagonist faces tragedy and disillusionment, Clockwork Angels is, on the whole, remarkably positive in spirit—typical of Rush. In the leading track, “Caravan,” the protagonist remembers his youth:

Later, after experiencing joys as well as enduring setbacks and heartbreaks, the hero says (in “Headlong Flight”), “Some days were dark . . . / Some nights were bright / I wish that I could live it all again.” 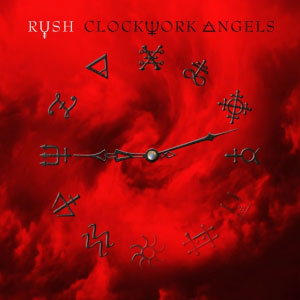 Finally, in the “The Garden,” the protagonist, attempting to come to grips with his mortality and his disillusionment with the teachings of his childhood, concludes, “The measure of a life is a measure of love and respect.” Philosophically, that doesn’t provide much, but it’s a fine enough sentiment for purposes of the album. (The line is reminiscent of Peart’s lines in “Faithless” from Rush’s previous album, Snakes and Arrows: “You can call me faithless / I still cling to hope / And I believe in love / And that’s faith enough for me.”)

The religion with which the protagonist wrestles expresses the views of Pangloss, the academic in Voltaire’s Candide who believes “all is for the best in the best of all possible worlds.” (The album notes explicitly mention Candide.) The song “BU2B” is clearly critical of this religious view, though the protagonist seems not yet to have rejected the view:

I was brought up to believe . . .
The universe has a plan
All is for the best
Believe in what we’re told . . .
While our loving Watchmaker
Loves us all to death

Next, in “Clockwork Angels,” the protagonist observes that the angels (represented by glowing orbs) “promise every treasure, to the foolish and the wise.” The song equates a line from Proverbs, “Lean not upon your own understanding,” with the view, “Ignorance is well and truly blessed.” In “The Garden” (a reference to Voltaire’s advice that we “tend our garden”), the protagonist questions the religion of his age: “In this one of many possible worlds, all for the best, or some bizarre test?” He concludes, “It is what it is,” and what matters is “the way you live.” He figuratively finds his way back home, deeply changed, but still retaining that hopeful spirit (as does the band itself).

I have learned from experience that I ought not offer a final evaluation of an album by Rush until I have had a chance to listen to it a few dozen times, as their music is remarkably rich. What I can say definitively now is that, for this Rush fan, the new album feels very much like home.