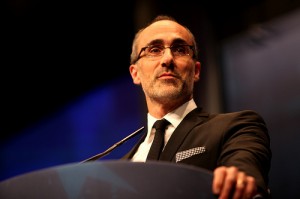 First consider Brooks’s vague description of “the proper role for government in society”:

Likewise, what is a “proper safety net”? Safety from what? From failure? What constitutes “hard times”? Hard times for whom? Who gets to decide such matters? Why is any of this a proper function of government? What justifies the government forcibly confiscating the wealth of some in order to turn that wealth over to others? How is that moral? Again, the left is happy to answer these questions and legislate accordingly.

As a description of the proper role for government, all of this is hopeless.

Brooks’s views about the source of truths about the proper role of government is equally hopeless: “In order to win the debate,” he says, “we must learn to say what’s written on our hearts about what our ancestors struggled to give us and what we hope to leave for our children” (emphasis in the original). Appeals to emotion and tradition hardly constitute a moral case for free enterprise.

Nor does Brooks do any better in his discussion of the “moral case” for entitlement reform. His case?

It is wrong to make a promise you cannot keep. For decades, politicians have promised to support their constituents in old age, to provide their medical care and to pay for the medical needs of the poor. While the government has a duty to provide a minimal safety net, the current entitlement system creates dependence but still leaves 10 percent of American seniors in poverty.

Although it is usually wrong to make a promise you cannot keep, this fact is a far cry from the moral case for entitlement reform. Brooks’s assessment entirely overlooks the fundamental wrongs involved in entitlement programs. Who is making promises to whom and with whose money in such programs? The government is making promises to the community, the elderly, the poor—with other people’s money, money those people worked hard to earn. How is this money being collected? It is being collected by force. What is wrong here is not that the government is making promises it cannot keep, but that the government is forcibly looting some Americans and giving their money to other Americans who didn’t earn it.

Why does government have a “duty to provide a minimal safety net?” Where does this alleged duty come from? From our hearts? From the Bible? Why didn’t the founders mention this “duty” in the founding documents? Again, Brooks offers no answers.

To his credit, Brooks offers some sensible piecemeal reforms for Social Security, such as raising the pay-out age, reducing the growth of payments, and cutting payments through means-testing. But his “moral case” for free enterprise is simply missing.

Worse, Brooks’s alleged moral case for free enterprise contradicts the actual moral case for capitalism. If individuals have a moral duty to hand their money to the government for redistribution, then they can’t have a moral right to their own lives and property. If the proper purpose of government is to “protect from market failure” and “provide a proper safety net for those falling on hard times” and “foster community,” then it cannot be to protect individuals’ rights to life, liberty, property, and the pursuit of happiness.

Because the proper purpose of government is to protect individual rights by banning the initiation of force from social relationships, forced wealth transfers of all kinds and degrees are immoral.

Brooks promised to offer the moral case for freedom. He shouldn’t make a promise he cannot keep.