“Who the Hell Is Julia?” TOS’s Week in Review for May 5

Noteworthy news and views from the week ending May 5, 2012

The Real Life of Julia

Barack Obama’s campaign recently launched a web page titled, “The Life of Julia.” We are supposed to “look at how President Obama's policies help one woman over her lifetime.”

David Harsanyi sensibly asks, “Who the hell is ‘Julia,’ and why am I paying for her whole life?”

Josh Fields and Charlie Vidal created a web page devoted to criticizing the campaign. Here is a taste:

Under Government Care: Julia struggles on the SAT because her local school has failed to teach her critical thinking or math skills. The public teacher unions, who overwhelmingly supported Barack Obama, have thwarted any effort to reform education. As a result, Julia has been stuck with her failing local school.

The Heritage Foundation published a similar response (although it approaches the matter from the perspective that conservatism, rather than a consistent defense of individual rights, offers the solution).

If Julia, whoever she is, wishes to live an independent life of her own design, rather than one dependent on the state and designed for her by politicians and bureaucrats, she must fight to establish capitalism in America. 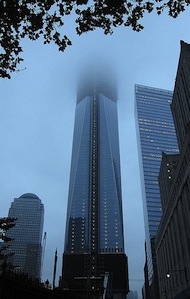 Although it should have been built faster and higher and solely by private parties with private money, the rise of the One World Trade Center (“Freedom Tower”) in New York is an inspiring sight.

The Daily reports, “Workers [erected] steel columns that will make its unfinished skeleton a little over 1,250 feet high, just enough to peak over the roof of the observation deck on the Empire State Building.”

U.S. and Chinese officials reportedly had reached an agreement to allow Chinese dissident Chen Guangcheng to travel with his family to the United States to attend a university. But now the deal is looking shaky, as the Obama administration, unsurprisingly, is taking rather less than a principled stand on the matter. The Telegraph reports,

On Saturday Hillary Clinton departed Beijing leaving Mr Chen at the mercy of the Chinese authorities with whom Washington claims to have struck a deal that will allow the 40-year-old legal activist to leave China to take up a fellowship at New York University.

Yet one western source close to the case told The Sunday Telegraph that it is by no means assured that Mr Chen will ever get to the United States.

"The Americans just don't know if Chen will be able to leave. It isn't a done deal," he said.

Although not all of Chen’s positions comport with individual rights, he has courageously fought oppression by officials in his home city, Linyi. MSNBC describes some of the injustices he challenged:

In 2005, the Linyi government started a campaign to "strictly enforce" the one-child policy by arresting and beating up women who broke the family planning law, forcing them to have abortions or sterilizations, heavily fining them and even arresting the relatives of those who had escaped to other cities.

Godspeed to Chen in his struggle for freedom.

A recent story from the New York Times begins with an ominous tone:

Apple, the world’s most profitable technology company, doesn’t design iPhones [in Nevada]. . . Yet, with a handful of employees in a small office here in Reno, Apple has done something central to its corporate strategy: it has avoided millions of dollars in taxes in California and 20 other states.

The rational response to this is: Hurray for Apple! The only morally corrupt players in this story are the governments in California and twenty other states that drive away business with increasingly higher, increasingly rights-violating taxes.

Obama this past week made a surprise visit to Afghanistan, where he signed a partnership agreement spelling out “the U.S. relationship with Afghanistan beyond 2014, covering security, economics and governance, Fox reports.

The deal is limited in scope and essentially gives both sides political cover: Afghanistan is guaranteed its sovereignty and promised it won't be abandoned, while the U.S. gets to end its combat mission in the long and unpopular war but keep a foothold in the country.

The deal does not commit the United States to any specific troop presence or spending. But it does allow the U.S. to potentially keep troops in Afghanistan after the war ends for two specific purposes: continued training of Afghan forces and targeted operations against Al Qaeda. The terror group is present in neighboring Pakistan but has only a nominal presence inside Afghanistan.

Senior administration officials said the U.S. is seeking an enduring partnership and will not repeat the mistakes of the past by allowing the Taliban to rise and provide a safe haven for terrorists.

The United States began its military engagement in Afghanistan in 2001. That we did not utterly destroy America’s enemies in the region then, that we have not done so to date, and that we clearly do not plan to anytime soon is testament to the grotesquely self-sacrificial nature of modern U.S. foreign policy.

“A citizen with a gun stopped a knife wielding man as he began stabbing people Thursday evening at the downtown Salt Lake City Smith's store,” reports ABC. A witness said, “A guy pulled gun on [the criminal] and told him to drop his weapon or he would shoot him. So, he dropped his weapon and the people from Smith's grabbed him.”

In a recent TOS post, Ryan Krause discusses the accusations that Walmart executives bribed officials in Mexico in order to conduct business, noting that “such bribery is made possible and necessary only by government interference in the marketplace.”

Hopefully Americans will overwhelmingly reject the mindlessness, collectivism, and mayhem of the Occupy movement and embrace a future of reason, individualism, and capitalism.

In any event, we at TOS will continue providing the most crucial tools toward that end: clear, concise, principled arguments in support of a civilized, rights-respecting society.