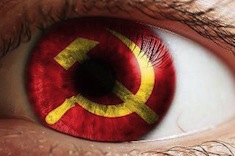 Many New Jersey parents were recently shocked to learn that their state’s standardized student test contained a question asking students “to reveal a secret about their lives [and] explain why it was hard to keep.” Child psychologist Dr. Steven Tobias said:

A question like this is really fraught with problems – one is issues of confidentiality, of privacy…it’s inappropriate to be encouraging kids to tell their secrets – in a forum like this – without knowing where the information is going.

On first learning about this, the former Soviet Union immediately came to mind. In that communist hellhole, school children were encouraged to spy on their parents and to report any anti-Soviet activity. The legend of Pavlik Morozov symbolized this barbaric tactic. In 1930, 12-year-old Morozov was murdered by peasants for denouncing his father and others to Soviet authorities and “was subsequently glorified as a martyr by the Soviet regime.” Whatever the actual facts of the case, Morozov’s “example as a model communist was taught to several generations of Soviet schoolchildren” under Stalin.

What’s disturbing about the NJ case is that the question was not the handiwork of some local teacher acting independently. It was approved at the highest levels of the state education bureaucracy. NJ Star-Ledger reporter Jessica Calefati noted that the question, which was being “field-tested” on a select number of tests involving about 4000 third- through eighth-grade students, had first to “go through a ‘several-step process’ of vetting and review by a testing expert, a content specialist and a panel of teachers...”

A State Department of Education spokesman “declined to say why it was included on some tests,” but said that “in light of concerns raised by parents” the question would be withdrawn from future tests.

Fortunately, parental outrage squelched this initiative—for now. But the fact that this kind of trial balloon can be launched today speaks volumes about the state of our culture, the dangers of government-run schools, and why we need the separation of education and state.