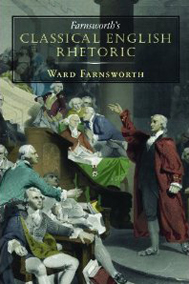 Although many teachers make the subject of rhetoric boring and seemingly useless, in Farnsworth’s Classical English Rhetoric, Ward Farnsworth makes it fascinating and fruitful.

Rhetoric, the art of speaking and writing effectively, is, as Farnsworth explains, about “practical ways of working with large aesthetic principles—repetition and variety, suspense and relief, concealment and surprise, the creation of expectations and then the satisfaction or frustration of them—all as they apply to the composition of a simple sentence or paragraph” (p. vii).

The study of rhetoric reveals why we love certain parts of books or speeches, why we underline and read them aloud to friends, and why we wish we had written or spoken them ourselves.

Farnsworth divides Rhetoric into three parts, dealing first with the repetition of words and phrases, then with structural matters, and finally with dramatic devices. In each part, he limits his focus to the patterns that, in his judgment, “are of most practical value,” and he provides a plethora of examples from classical works, many of which are a joy to read.

On the use of repetition, for example, Farnsworth quotes Henry David Thoreau: “Simplicity, simplicity, simplicity!”; and Shakespeare: “O Romeo, Romeo! Wherefore art thou Romeo?” (pp. 4, 5). On the use of the rhetorical device known as anaphora, the repetition of a word or sequence of words at the beginnings of successive clauses, he quotes Edmund Burke: “There is nothing simple, nothing manly; nothing ingenuous, open, decisive, or steady, in [this] proceeding” (p. 25). And on the technique of epistrophe, the repetition of a word at the end of successive clauses, he quotes Frederick Douglass:

In Rhetoric, Farnsworth discusses a deluge of such devices, each with examples, many of which are zingers. Take this one, by William James: “He had incurred the ridicule of having to have his explanation explained” (p. 72). That, Farnsworth explains, is an example of polypton, the repetition of words derived from the same root, and he adds that James employs it memorably in this case by using the related words side by side.

In his discussion of structural matters, Farnsworth quotes Emerson employing the rhetorical device of isocolon, the use of words or phrases of the same length to reinforce parallelism: “The louder he talked of his honor, the faster we counted our spoons” (p. 76). For those who like such constructions, Farnsworth offers a likely explanation:

The line . . . employs similar rhythms in each half. Both clauses use a pair of dactyls—that is, two rounds of syllables where a stressed one is followed by two that are not stressed: first, “the louder he talked of his”; then, “the faster we counted our.” The rhythmic similarity of the two halves creates a felt sense of symmetry between the talking and its consequences. (p. 76)

On other structural matters, Farnsworth quotes Alexander Hamilton employing chiasmus, a device in which words or ideas are repeated in reverse order in the same or modified form: “The legislature must be controlled by the constitution and not the constitution by them” (p. 100) and Thomas Paine employing ellipsis, the omission of words that can be inferred from the context: “In short, had you cast about for a plan on purpose to enrich your enemies, you could not have hit upon a better” (p. 157).

He quotes Winston Churchill employing anastrophe, the inversion of the usual order of words or clauses: “[T]he long night of barbarism will descend, unbroken even by a star of hope, unless we conquer, as conquer we must; as conquer we shall” (p. 123) and Patrick Henry employing asyndeton, the omission of conjunctions for terse effect: “Sir, this is a picture so horrid, so wretched, so dreadful, that I need no longer dwell upon it” (p. 153).

He then quotes Thoreau employing polysendeton—the use of extra conjunctions for emphasis:

If you are ready to leave father and mother, and brother and sister, and wife and child and friends, and never see them again—if you have paid your debts, and made your will, and settled all your affairs, and are a free man—then you are ready for a walk. (p. 141)

Farnsworth’s Rhetoric is teeming with such wonderful and well-organized examples.

In the final section, dealing with dramatic devices, Farnsworth discusses such techniques as praeterito, which amounts to saying something by not saying it, as in this gem from Mark Twain: “I should have said something then which could not be put into a Sunday-school book without injuring the sale of it” (p. 174). The many other devices discussed in this section include aposiopesis, or breaking off midstream, as employed here by G. K. Chesterton:

The present condition of England is briefly this: That no Englishman can say in public a twentieth part of what he says in private. One cannot say, for instance, that—But I am afraid I must leave out that instance, because one cannot say it. I cannot prove my case—because it is so true. (p. 185)

Throughout Rhetoric, Farnsworth proceeds as above, briefly explaining the names of the devices being studied, giving rough translations for each (mostly from Latin), and stating why one quote or another may seem powerful, eloquent, or suspenseful and how readers may use them profitably in their own writing and speaking.

For example, in the section where he tackles rhetorical questions of the “Is there anything worse?” variety, Farnsworth says:

[The question] is much like asking if anyone present will disagree, but here the challenge is more formidable because it cannot be met just by speaking up; it can be met only with an example. If the question is taken seriously it causes the listener to pause and search for an answer among terrible things, and then the game is largely won; for even if the answer is found, the speaker has succeeded in putting the subject into bad company. (p. 216)

By providing an abundance of examples to concretize his explanations, Farnsworth helps readers understand the means by which great writers and speakers have made their rhetoric so powerful, memorable, and enjoyable. This, in turn, enables readers to begin employing the same principles themselves.

Reading rich quote after rich quote, however brilliant they may be, can numb the mind; so readers may find that this book is best consumed in small bites over time. But anyone who communicates for a living, or just loves a well-turned phrase, is bound to enjoy Farnsworth’s Rhetoric—and become more eloquent for the pleasure.

View all posts by Daniel Wahl →
Review: Act of ValorReview: The Godless Constitution
Return to Top