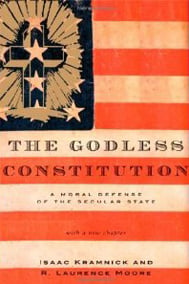 We often hear claims that America is a “Christian nation” and that “the Constitution was designed to perpetuate a Christian order” (James Dobson). Are such claims correct? If not, how does one show it? If America is a secular nation, how can one convince ignorant but active-minded people of this truth?

Toward answering these questions, The Godless Constitution: A Moral Defense of the Secular State by Isaac Kramnick and R. Laurence Moore is a good place to start. Though not without flaws, it offers a fascinating and valuable history of the relationship between church and state in America.

Originally published in 1996, this book has been updated twice, the last time in 2005. Chapter 1 surveys the contemporary stage, with ample quotations of prominent Christian leaders and their claims of America’s Christian identity. Chapter 2 reviews the content of the Constitution regarding religion, noting among other things that it never refers to a god. This chapter also offers an overview of debates and discussions on the religious content of the Constitution at the time it was framed.

The next three chapters are concerned with the root ideas, both secular and religious, that enabled the founders to formulate their winning arguments, focusing mainly on the ideas of Roger Williams, John Locke, and Thomas Jefferson.

In relating the story of Roger Williams, the authors offer a potent argument for Christians who may not have considered that religion can be harmed by a religion-wielding government. . . .

Hannah Krening is a classical pianist and private piano teacher in Colorado, where she lives with her husband Doug. Together, they recently launched Hungry Minds Speaker Series, presenting public supper talks on culture and politics in the Denver area.