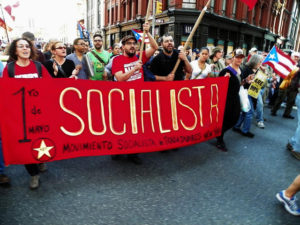 Occupiers Celebrate Communism, Socialism, and Anarchism for May Day

Communist regimes enslaved, tortured, and slaughtered hundreds of millions of people in the last century, and to this day communists in North Korea, China, and elsewhere tyrannize citizens. To cite but a couple of examples from recent headlines, North Korean communists continue to murder even children in brutal concentration camps, and Chinese officials “jailed and harassed [blind activist Chen Guangcheng] for years for his campaigns against forced abortions and sterilizations under China's birth control policies.”

Anyone who values human life and liberty must condemn communism as horrifically evil. So, of course, many in the Occupy Wall Street movement celebrated it yesterday for May Day.

In New York, one Occupier carried a Chinese flag while others carried a banner stating, “Kill Capitalism, Save the World.” In Chicago, Occupiers carried a sign that read, “Long Live Communism.”

Other Occupiers promoted a generic form of socialism. In Denver, for instance, Occupiers carried a banner stating, “Democratic Socialists of America”—apparently either oblivious or indifferent to the well-known fact that any degree of socialism (the essence of which is the state’s use of force to redistribute wealth as “society” sees fit) violates individuals’ rights—and oblivious or indifferent to the equally well-known fact that the National Socialists of Germany came into power through “democratic” elections.

But the Occupiers’ May Day celebration was not restricted to glorifying genocidal communists and rights-violating socialists. In Cleveland, an Occupier was arrested for (allegedly) trying to bomb a bridge. In Seattle, anarchists smashed store windows and vandalized cars. In Los Angeles, Occupiers assaulted two police officers. And so on.

Many Americans, lulled to sleep by cries for “tolerance” and calls to “judge not that ye be not judged,” either cannot see the danger posed by the left, or do not know what to do about it. To defend America and its core principles, we must condemn as evil the ideologies of communism, socialism, and anarchism—and the people who seek to instate them. And we must champion as just and moral capitalism, the system of individual rights and rule of law.

Image: Creative Commons by The Eyes of New York

View all articles by Ari Armstrong →
Letter to the Editor
On May Day, Remember the Victims of Communism—and Condemn the Evil Ideology“Occupier” Thug Clubs A Female Cop Over the Head
Return to Top