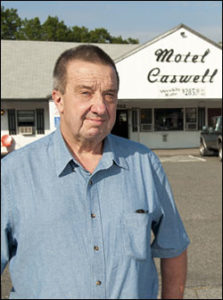 It is outrageous that here in America the police can seize a person’s property, sell it, and keep the proceeds—all without so much as charging the victim with a crime, much less obtaining a criminal conviction. Under such a system, the police are violators rather than protectors of property rights.

Thankfully, the Institute for Justice (IJ) continues to fight such abuses. In a recent release, IJ announced:

A federal lawsuit out of Massachusetts challenging the government's abuse of civil forfeiture laws—laws that allow the government to take private property without convicting or even accusing the property owner of a crime—will go to trial before the U.S. District Court in Massachusetts later this year.

The case involves the Motel Caswell in Tewksbury, Massachusetts, an establishment owned and operated by Russ Caswell and his family. The government wishes to seize this property, IJ reports, “because a tiny fraction (.05 percent) of the people who stayed at the motel between 2001 and 2008 were arrested for drug crimes on the property.” (See the video below for additional details.)

The government’s position is absurd. It is impossible (and illegal) for a motel operator to monitor all of the private activities of those who rent rooms. There is not a single longstanding motel or hotel in existence in which crimes have not been committed. Yet the government wishes to seize the Caswells’ property for actions of those whom the Caswells could not possibly have controlled. This is unjust in that it seeks to turn property owners into de facto enforcers of government prohibitions, and it is theft in that the government is seizing private property without even the trimmings of due process.

Larry Salzman, an attorney with IJ, explains another aspect of the injustice:

Civil forfeiture treats innocent property owners like the Caswells worse than criminals. Criminals must be proven guilty before their property is taken, but once the government targets a property for forfeiture an owner must prove himself innocent to get it back: This turns the American idea that you're innocent until proven guilty on its head and is one of the main perversions of the legal system we're fighting against in this case.

Hopefully IJ will prevail in this case and convince the courts to stop such assaults on property owners by the government.

For additional background on the issue, see IJ’s 2010 report, “Policing for Profit: The Abuse of Civil Asset Forfeiture.”

Image of Russ Caswell by Institute for Justice

View all articles by Ari Armstrong →
Letter to the Editor
Will Bork Convince Romney to Select Anti-Liberty Judges?On May Day, Remember the Victims of Communism—and Condemn the Evil Ideology
Return to Top