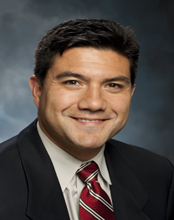 A new study has announced a major advance in the battle against cancer. Seth Augenstein reports:

In a study published [May 14, 2012] in the journal Cancer Cell, four scientists from the Cancer Institute of New Jersey and the Institute for Advanced Study laid out their work involving a compound that corrects a mutation in the valuable p53 protein—“a kind of common denominator" in a wide range of cancers, including ovarian, pancreatic, breast, lung, esophageal and others.

The study’s lead author, surgical oncologist Darren Carpizo, noted that "P53 is at the helm of an elaborate mechanism which is in place to maintain the integrity of your genome in every cell." Arnold Levine, another of the researchers and 1979 co-discoverer of the p53 protein, called the protein “a skeleton key for a majority of cancers.”

Augenstein notes that “The p53 protein is a kind of intracellular security force that cracks down on cells when they go rogue, but which is hijacked by cancer, allowing malignant cells to spread.” The problem that scientists have been trying to solve is: how to reactivate the protein.

With the powerful, productivity enhancing aid of computers, the researchers isolated a small group of compounds, called “thiosemicarbazones,” that appear to be key to reactivating the protein. After scientists injected the compounds into mice implanted with human tumor cells, “The tumor cells shrank, or slowed in growth, but the other cells were unaffected.”

Levine said that “Since p53 mutations account for 60 percent to 70 percent of all cancers, he’s hopeful the study will open up a new path for cancer research.”

Although, as the article notes, “clinical trials in humans are still years away,” and the research path is always uncertain, the potential here for life-saving treatments is profound.

In their capacity as scientists applying reason to problems of human life, Carpizo, Levine, and their research partners are unmitigated heroes. These men and women exemplify moral virtue—the choice to focus, to think, and to act rationally—and they deserve not only congratulations, but also a heartfelt “Thank you!” from all of us whose lives are or may be enhanced or extended by their work.

Cheers to these men of the mind.

Image of Darren Carpizo: The Cancer Institute of New Jersey

View all articles by Michael A. LaFerrara →
Obama Should Defend Doc Who Located bin Laden, Not Feed Him to Pakistan’s WolvesArnold Kling’s “Free Enterprise” Plan for American Fascism
Return to Top