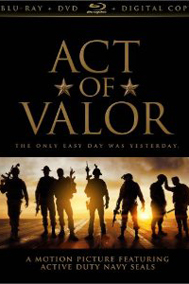 Author’s note: Because I want to address several key events of this story, I’ve written this review in a way that contains spoilers. Readers may prefer to view this outstanding film before reading the review.

For anyone who loves America and wants the country defended against Islamic totalitarians and other savage enemies, a film starring active-duty Navy SEALs doing precisely that should be a rare treat. Act of Valor is that film, and it delivers fulsomely on this promise.

The movie is a fictionalized version of the sort of missions America’s elite commandos engage in. It portrays the tactics, methods, technology, and overwhelming fire power that America brings to bear on her foes when her political leaders permit the U.S. military to take off the gloves and obliterate our enemies.

In the story, various jihadist factions are in league with Russian smugglers and Mexican drug cartels that are to help the Islamists slip across the Mexican border into America. There, armed with nonmetallic vest bombs and deploying female suicide bombers, the jihadists will disperse to every major city, enter crowded public venues, detonate the bombs, and murder countless American civilians.

The SEALs’ mission is to stop them. They do so by means of surreptitious surveillance, uncompromising interrogation, and ruthless assault. Several scenes early in the movie, at the beginning of the causal sequence leading to the climax, showcase both the heroes’ prowess and their dedication to defending America.

The smugglers’ minions in Costa Rica murder one CIA agent investigating their connection to jihadists and kidnap another, whom they torture for information. The SEALs’ first step is to rescue the CIA agent and retrieve information from both her and the criminals. They perform a night jump into the Costa Rican jungle and approach the enemy stronghold. Stealthily, they move into position. They maintain contact with the Swift Boats inserted by helicopter for their exfiltration. They control an airborne surveillance technology, called a Raven, enabling their squad leader to witness via personal computer—in real time—enemy activity within the stronghold and to convey information to the men on the ground. The team deploys a lethal sniper who, silently, terminates fully a half dozen foes before the enemy realizes they are under assault. Then the team attacks. . . .

View all articles by Andrew Bernstein →
Letter to the Editor
Review: The AvengersReview: Farnsworth’s Classical English Rhetoric
Return to Top