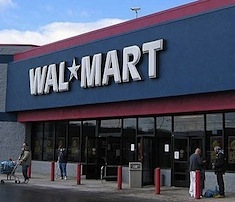 The great producer Walmart, loathed by Marxists, “Progressives,” and Occupiers everywhere, has once again found itself at the center of a controversy. Recently, the New York Times broke the story that, for years, Walmart systematically bribed government officials in Mexico in order to secure building permits, which enabled Walmart to expand and thrive to the extent that one in five of its stores is now located in Mexico. As a result of these allegations, Walmart executives may go to jail, as bribery of foreign officials is a violation of the Foreign Corrupt Practices Act. In addition, the company’s image and stock price have suffered.

But such bribery is made possible and necessary only by government interference in the marketplace.

In a free market, if a business wants to build a new store, it purchases the necessary property from the current owner. If the owner does not want to sell the property for the price the business is willing to pay, the business is free to look elsewhere for property, or not to build the store. There is no possibility of bribery in such a market because no one holds the power to grant or withhold permits. The only role of the government in such a market is to protect the rights to property and voluntary contract.

Of course, Mexico is not a free market but a highly controlled, heavily regulated mixed economy, with a complex bureaucracy of government officials dictating who is permitted to sell what and to whom. In fact, in a report quantifying how easy it is to do business in various countries, Mexico ranks 53rd, right between St. Lucia and Botswana.

When government officials are able to permit or forbid businesses to engage in voluntary transactions, businesses must either pay the officials for permission or go out of business. And the more power government has in this regard, the less businessmen can produce the goods and services on which our lives depend. As Ayn Rand put it:

When you see that in order to produce, you need to obtain permission from men who produce nothing—when you see that money is flowing to those who deal, not in goods, but in favors—when you see that men get richer by graft and by pull than by work, and your laws don't protect you against them, but protect them against you—when you see corruption being rewarded and honesty becoming a self-sacrifice—you may know that your society is doomed.

Mexican society, like American society, may simply be doomed at this point. But if Mexicans and Americans care to save their faltering societies from that tragic end, they need to unshackle the producers. They can start by standing up for Walmart.

View all articles by Ryan Krause →
Steve Jobs, Willy Wonka, and Good Reason for a Torrent of Expletives“Who the Hell Is Julia?” TOS’s Week in Review for May 5
Return to Top