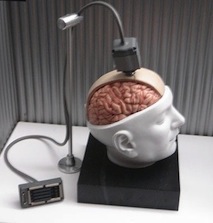 Cathy Hutchinson, who has been paralyzed for more than 15 years due to a stroke, recently directed “a robotic arm to pick up a bottle of coffee and bring it to her lips,” using only her mind—and some mind-bending new technology, the Associated Press reports.

“The device, called BrainGate, bypasses the nerve circuits broken by the brainstem stroke and replaces them with wires that run outside Hutchinson's body. The implanted sensor is about the size of a baby aspirin,” Abcnews.com reports.

You can go from the brain, which seems to be working quite well, directly to a device like a computer or a robotic arm," said BrianGate developer John Donoghue, director of the Institute for Brain Science at Brown University in Providence, R.I. "This can help restore independence to a person who was completely reliant on other people for every activity, whether it's brushing their teeth, eating their dinner or taking a drink."

Hutchinson, who has been unable to move or speak for 15 years, had the 96-channel sensor implanted in her brain's motor cortex in 2005. Since then, the BrainGate team has been fine-tuning the system to give her back some of the control she lost.

"Having control over your life restores dignity," said Donoghue. "If you just watch her reaction after she picks up the cup and takes and drink, that smile captures everything."

This is a remarkable triumph of the human mind over the problems of nature. And the minds at work here are just getting started. Hats off to everyone involved.

Watch Cathy and BrainGate’s breakthrough below:

View all articles by Joshua Lipana →
Letter to the Editor
Soviet-Style Test Question Highlights Dangers of Government-Run SchoolsObama Should Defend Doc Who Located bin Laden, Not Feed Him to Pakistan’s Wolves
Return to Top