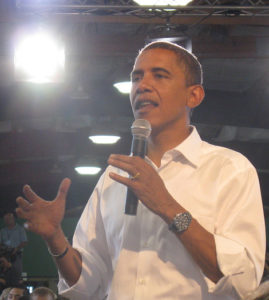 In a speech to the American Society of Newspaper Editors this past Tuesday, Barack Obama condemned the Republican budget proposal as “thinly veiled social Darwinism.” Why? Because Republicans would spend slightly less money on welfare and other programs than Obama proposes, and increase government spending at a slightly slower rate than Obama would.

But if “social Darwinism” refers to anything in reality, it refers to the notion that it is okay for some people to use force against others as do lower animals in the struggle for survival. And if Obama wishes to locate the nation’s leading advocate of this practice, he need look no further than the mirror.

Whereas the Republicans want to slightly curb the coercion the federal government uses against people, Obama seeks to massively increase it. Obama wishes to force producers to turn over more of their wealth to programs such as government-run education, Medicare, and corporate welfare for “clean energy technologies” (such as the infamous transfer to Solyndra).

The unifying theme of Obama’s proposals is force. He wants to force those who earn wealth to give increasingly larger portions of their earnings to those who did not earn it. And force, the relationship of predator to prey, is the meaning of “social Darwinism”—again, if it has any meaning at all.

Obama absurdly applies the phrase “social Darwinism” to the process of individuals and businesses producing freely, keeping or using the fruits of their effort as they see fit, trading by mutual consent, and giving to charity if they so choose. But, insofar as the phrase is anything other than a meaningless smear, “social Darwinism” refers to people forcing each other as though they were mindless animals, engaging in coercion—from low-level street crime to legalized theft perpetrated by the federal government.

Viewed in terms of the only possible legitimate meaning of the phrase, the preeminent “social Darwinist” of our time is President Obama.

Let that be known.

View all articles by Ari Armstrong →
AmeriCorps: Collectivist, Immoral, and Should be EliminatedThe Secular Joy of Easter
Return to Top