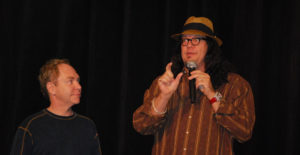 After attending a conference in Las Vegas earlier this week, I had the chance to see Penn & Teller’s magic show at the Rio. A big part of why their show is so entertaining is that they present interesting ideas in novel and provocative ways. Their show is something of a theme park for the mind.

The prestidigitating duo reveal just enough of their tricks to provide the audience with a window into the world of performance magic. In doing so, they illuminate the difference between sleight of hand and misdirection on the one hand, and bogus claims of psychic and supernatural powers on the other. For instance, Penn Jillette performed the typical “psychic” trick of guiding or predicting the choices of an audience member. But, while Penn made the trick into a delightful mind-bender, he also used it to denounce as “criminal” alleged psychics who prey on people’s fears, tragedies, and insecurities.

A couple of tricks were totally transparent to the audience—except for a single member who participated on stage. For one of these tricks, Penn & Teller made it seem to a woman that solid steel rings passed through her arms, while the audience could see how this was accomplished through misdirection and clever motions. The skill with which the duo manipulated the willing participant was fun to watch. But the deeper meaning, the point that will cause me to reflect on the show far into the future, is the ease with which those skilled in manipulation can misdirect people by withholding information or making false claims.

(Unfortunately, Penn himself has been party to some illegitimate manipulation regarding Ayn Rand. Although he sometimes claims to be a fan of Rand and her novel Atlas Shrugged, he has also suggested, among other absurdities and foul-mouthed rudeness, that Rand led a cult.)

Penn & Teller also offered explicitly pro-liberty messages during parts of their show. In one trick, Penn denounced the TSA’s rights-violating airport “security” protocols. (I purchased a copy of the Bill of Rights that the duo had printed on small metal plates specifically to trigger metal detectors.) The theme of another trick was that preserving the right of free speech is crucially important—even when speech or symbolism may be offensive. Penn even offered a rousing defense of the Second Amendment right to keep and bear arms—just before performing the famous trick of catching a bullet between his teeth.

On your next trip to Vegas, check out Penn & Teller’s fabulous show. They’ll do something far more important than entertain you with the fun and facts of magic—they’ll show you the power of entertainment to present big ideas.