What do Rick Santorum and Jane Fonda Have in Common? 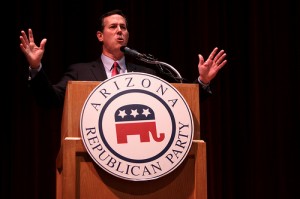 For one thing, both advocate censorship.

As Steven Nelson writes in The Daily Caller, Santorum “has promised to crack down on the distribution of pornography if elected.” This is not mere posturing on Santorum’s part: “If the government wanted to aggressively move against Internet pornography, it could do so,” attorney Eugene Volokh told Nelson.

But pornography involving consenting adults violates no one’s rights; thus the government has no moral right to “crack down on” it. Moreover, the line between legal pornography and illegal pornography (i.e., “obscenity”) is entirely arbitrary, resulting in arbitrary and politically-motivated prosecutions. As a practical matter, as Nelson points out, while U.S. prosecutors could go after U.S. pornographers, they could do nothing about pornography coming from out of the country—unless Santorum is prepared to impose Chinese-style, internet-wide censorship.

Parents worried about what their children view on the internet are free to control their children’s internet activities, just as they are free to monitor what books, magazines, television programs, and video games their children access. If parents choose not to monitor their children’s activities, that’s their right as well—so long as they don’t cross the line into criminal neglect or abuse. If they do cross that line, the government should take action against the parents. But in no case should the federal government violate the rights of consenting adults in a vain attempt to compensate for irresponsible parenting.

The last thing America needs is a Censor in Chief.