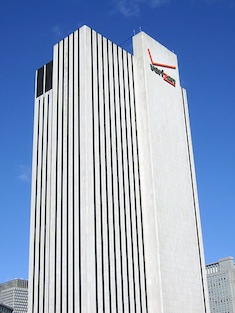 T-Mobile, other companies, and so-called “public-interest” groups, are calling for the government to block Verizon’s purchase of “spectrum from cable companies,” the Washington Times reports.

The “justifications” for this call for government force are that (1) if Verizon were to make such a purchase, that would create “‘excessive concentration’ of wireless spectrum in Verizon’s hands” and (2) “the parties had not provided enough information to prove that the acquisition was in the public interest.”

“Excessive concentration” by what standard? What’s the “right amount” of concentration? The right amount of concentration is whatever concentration Verizon is able and willing to achieve in a free market, by voluntarily trading with other companies and customers. The only objective standard for such questions is the freely chosen, non-coercive interactions of individuals and businesses in the marketplace.

Since there is no such entity as “the public,” since the public is merely a number of individuals, any claimed or implied conflict of “the public interest” with private interests means that the interests of some men are to be sacrificed to the interests and wishes of others. Since the concept is so conveniently undefinable, its use rests only on any given gang’s ability to proclaim that “The public, c’est moi”—and to maintain the claim at the point of a gun.

Neither individuals nor businesses should ever have to answer to government as to whether their rights-respecting choices or contracts are “in the public interest.” Recognizing this fact is good not only for “all of us” but, more importantly, for each of us.

View all articles by Joshua Lipana →
Hunger Games a Worthy Addition to Dystopian CorpusFrom Morning Brew to Space Exploration, Good News Is All Around
Return to Top