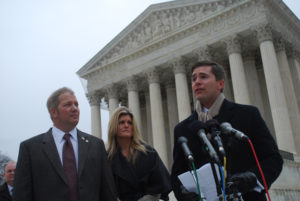 The Supreme Court helped protect property rights yesterday by deciding unanimously that Mike and Chantell Sackett can legally challenge the EPA’s demand that they cease work on building their new home. The Pacific Legal Foundation (PLF), which represented the Sacketts, announced the victory.

A Reason TV video summarizes the case. After the Sacketts purchased property near Priest Lake in Idaho for the purpose of building a home, the EPA declared that they could not build because the government had designated their property a “wetland.” Further, after the EPA ordered the Sacketts to stop work and threatened them with severe fines if they continued, the EPA declared that its threat could not be challenged in court.

The Supreme Court ruled that the EPA’s claim could be challenged on the grounds that the land in question is not a “wetland.”

Damien Schiff, the PLF attorney who litigated the Sacketts’ case, said the following about the decision:

This is a great day for Mike and Chantell Sackett, because it confirms that EPA can’t deny them access to justice. EPA can’t repeal the Sacketts’ fundamental right to their day in court. And for that reason, it is a great day for all Americans, for all property owners, and for the rule of law. . . . EPA can’t try to micromanage people and their property—it can’t order property owners to dance like marionettes—while denying them any meaningful right to appeal to the courts. It can’t threaten property owners with financial ruin and not have to justify its threats to a judge. And it can’t issue lazy, drive-by ‘wetlands’ edicts about private property. It will have to put in some honest work and use credible science, because the regulators must be able to justify their wetlands orders in a court of law.

Kudos to PLF and the Sacketts for their victory and to the Supreme Court for stopping this particular assault by the EPA.

As the Reason TV video points out, the EPA acted against the Sacketts on the authority of the 1972 Clean Water Act, which (among other things) effectively nationalized any property that the government declares a “wetland.” But property owners have a moral right—and properly a legal right—to drain their land of putrid swamps and other so-called “wetlands” if they want, or to preserve or create ponds or other water features as they see fit. What owners do with their property is properly none of the government’s business (unless property owners somehow violate the rights of property owners downstream or the like).

While the Supreme Court’s decision is a victory for property owners, it is only a small step in the right direction. Anyone concerned with protecting property rights must embrace as his ultimate goal the elimination of all rights-violating government policies and actions, including all those of the EPA.

Image: Pacific Legal Foundation (Image of the Sacketts and Schiff)