Scientists Need Not “Study” Psychic Nonsense to Reject It 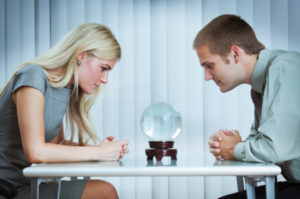 Surprise, surprise: “A new study has failed to find evidence that psychic ability is real,” reports Live Science. But we didn’t need a “new study” to figure that out.

The background is that, last year, the Journal of Personality and Social Psychology published Daryl Bem’s article purporting to show “retroactive influences on cognition.” Bem’s “experiments” allegedly showed cases in which an “individual’s responses are obtained before the putatively causal stimulus events occur.”

Bem’s claim is not that people can predict certain things about the future based on historical trends and the causal nature of the world (e.g., the Sun will rise tomorrow). Rather, his claim is that people can have “precognition . . . and premonition . . . of a future event that could not otherwise be anticipated through any known inferential process.” They can do this, he says, because “information travels backwards in time.”

Real scientific experimentation starts with observations of reality, such as the facts that objects fall to earth, eyes perceive light, magnets attract certain types of metals, living cells have a particular structure, and distant reaches of the universe contain (or contained) various entities detectable through modern telescopes. Most fundamentally, real science comports with the law of cause and effect—the truth that a thing can act only in accordance with its identity. This law is necessarily presupposed by all genuine scientific inquiry. One immediate implication of the law of causality is that, because the future hasn’t yet occurred, information can’t travel backward in time from it.

Bem’s “theory” of psychic ability rejects the law of cause and effect; it posits as science the fantasy that people can “know” the future by means that contradict the law of causality. Thus, despite its superficial trappings of “experimentation,” Bem’s “theory” is properly cast aside as the rantings of a mystic.

Those who wish to examine the details of the “chaotic, careless nature” of Bem’s “experiments” may read James Alcock’s critique and follow-up for the Committee for Skeptical Inquiry.

But the fact that Bem’s “research” was ever taken seriously by any portion of the scientific community is deplorable. Bem is not a scientist, he is an anti-scientist, and he should be condemned as such.