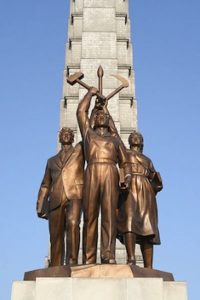 In a recent interview with Book Page, novelist Adam Johnson offered observations of North Korea that capture the consequences of collectivist ideals taken seriously. Johnson travelled to the dictatorship while writing his latest book and was struck by the stark conformity and fear he found there:

There are four shoe styles for men in North Korea; there’s one shade of lipstick for women; it’s so surreal to see the sameness of everyone. I would walk through these crowds of people and they wouldn’t dare to look at me. It was a risk. So it was really clear that not a single spontaneous thing could happen there. . . .

I am a person who loves narrative, who teaches narrative theory. In our stories in the West we believe every character is the center of his or her own story. We believe every human is unique and valuable, has yearnings and desires.

But in North Korea there is a national script, conveyed through propaganda. There is one notion about who the people are and what the national goals are, and you as a citizen are conscripted to be a part of this national narrative… You have to relinquish your own personal desires.

Everyday life in North Korea, as Johnson describes it, is the result of collectivist ideals, which hold that man must sacrifice to the group—whether society, the state, or the nation. Under North Korean collectivism, men are forced to live in accordance with a “national script,” and thus have no hope of ever pursuing their desires, cultivating their abilities, or standing apart from others. They don’t live as men; they “live” as “men” reduced to enslaved sheep—if they remain alive at all.

“Life” in North Korea is a vivid example of what happens to a nation and its people when they embrace collectivism and put it into practice. This is yet another reminder of the urgent need to repudiate collectivism and reestablish America’s founding ideals—the inalienable rights of each individual to his life, liberty, and pursuit of happiness.