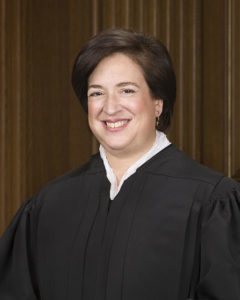 Apparently Justice Elena Kagan is oblivious to the obvious fact that taxes are coercive, in that they forcibly take wealth away from the owners of that wealth and give it to others.

On Wednesday, the Supreme Court considered oral arguments regarding the Medicaid mandate that ObamaCare would impose on states. An exchange between Kagan and Paul Clement (who argued against the mandate) is surreal.

Kagan asked Clement whether he would oppose the mandate even if the “the Federal Government picked up 100 percent of the cost.” He said he would. Kagan replied:

So that really reduces to the question of why is a big gift from the Federal Government a matter of coercion? In other words, the Federal Government is here saying, we are giving you [the states] a boatload of money. There are no—there's no matching funds requirement, there are no extraneous conditions attached to it, it’s just a boatload of federal money for you to take and spend on poor people's healthcare. It doesn’t sound coercive to me, I have to tell you.

Why does Kagan drop this context? Because she needs for people to ignore such facts so that they will buy in to her next whopper.

Later in her exchange with Clement, Kagan suggests that there is no difference between the federal government spending “its” money on Medicaid and a private employer spending his money on salaries. This patently ignores the fact that the federal government collects “its” money by force, by threatening to lock people in cages if they don’t pay up, whereas the employer earns his money by trading value for value in the marketplace.

American federalism is intended primarily to protect individual citizens against federal coercion. Thus, the question of “whether states would be ‘coerced’ by the federal government to expand their share of Medicaid costs by the risk of losing funding if they refused to take part” (as CNN summarizes) is not the primary issue at hand; it is secondary, and Americans who care about liberty must never lose sight of this fact.

Whether the federal government confiscates citizens’ wealth directly or forces or “motivates” state governments to do it, the victims of the coercion remain victims, and they remain individual taxpayers.

Of course, the Supreme Court’s job is not to eliminate all forms of federal coercion, but to uphold the constitution by restricting congress to its enumerated powers and thereby protecting the federalist system that the Founders established. (As to why the Medicaid mandate violates the constitution, see my short interview with constitutional scholar Dave Kopel as well as Kopel’s much more detailed amicus brief.) But in evaluating the constitutionality of the Medicaid mandate, Supreme Court justices ought to at least recognize rather than obfuscate the basic fact about taxation that makes it what it is: namely, that it is force.

View all articles by Ari Armstrong →
Why does E.J. Dionne Pretend the United States is a Democracy?Keep the Lights On—and Shine ‘Em on Environmentalist Nonsense
Return to Top