“Hate Crime” Laws are Gateways for Censorship and Statism 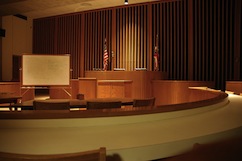 A criminal trial stemming from a 2010 incident that drew national attention began in New Brunswick, NJ on February 24, 2012. The defendant, Dharun Ravi, allegedly spied on his Rutgers college roommate Tyler Clementi with another man via webcam, and subsequently distributed the recordings via Twitter.

The prosecution claims that Ravi “targeted Clementi for being gay,” and Ravi was indicted on “bias” (aka “hate crime”) charges in addition to invasion of privacy and other charges. But the case is controversial, and the jury must ultimately “decide whether Ravi committed a hate crime or merely pulled a teenage prank...” (Though the episode ended horribly, with Clementi committing suicide, the NJ Star-Ledger noted that “the judge will instruct the jury that the charges against the defendant are in no way linked to Clementi’s suicide.”)

The case ignited debate in the legal community:

"Usually this kind of charge is associated with an assault or murder or some kind of violence where it’s much more clear that you’re trying to hurt somebody, physically," said Susan Abraham, a New York Law School professor and a former New Jersey public defender. "I think that’s part of the controversy. Maybe a hate crime isn’t appropriate, maybe it’s more anti-bullying."

“Hate crimes” are defined by the Senate Research Center in Texas as “laws specifically criminalizing or enhancing the penalty for criminal offenses when the perpetrator’s actions were motivated by the race, religion, or some other characteristic of the victim.” As Reason’s Jacob Sullum notes, a “hate crime” conviction carries a five- to ten-year prison term, while a simple invasion of privacy conviction involves a three- to five-year term. Thus, if convicted, Ravi would face jail time for “bias”—and possibly more time for that than for the actual crime of invasion of privacy.

Though the present legal controversy revolves around the appropriateness of “bias” charges in this particular case, the case raises more fundamental questions: Even if a person hates someone because of some characteristic such as race or sexual orientation and is motivated by those feelings to commit a crime against him, should those feelings warrant additional punishment—punishment over and above the normal punishment for the physical crime committed? Is a criminal action somehow less wrong if it is motivated by jealousy or revenge rather than by hate?

The answer to both questions is no.

“Hate crime” is an illegitimate concept. Intent is already inherent in the concept of “crime.” With certain objectively defined exceptions (e.g., a mental disorder such as “temporary insanity”), whether the intent is motivated by hate or some other emotion or idea is properly irrelevant to the punishment meted out for the crime. The consequences of ignoring this fact are grave.

As Yaron Brook notes, “Once the government starts punishing criminals for acting on ‘unacceptable ideas,’ it has assumed the role of arbiter for which ideas are acceptable or not,” a potentially unlimited power. A hint of the dangers inherent in that power was demonstrated in Oakland, CA in 2007, when, as reported by George F. Will, terms such as “family values” and “traditional family” were banned by the Oakland government as anti-gay “hate speech.” Under current “hate crime” laws across America, such “unacceptable ideas” are criminally punishable only when connected to a criminal action. But what is to stop future legislatures from divorcing “criminal” thoughts from criminal actions, and prosecuting people for advocating “family values”—i.e. jailing people for ideas alone? And what would this mean for freedom of speech?

Bigotry is a hideous sore on society. But when such sores are addressed with the disease of non-objective law, statism gains entry into a free society. If we value freedom of speech—which means, if we value the main pillar of a free society—then we must not permit bigotry to goad us into establishing non-objective laws that will, in time, make mere bigotry look benign by comparison.

View all articles by Michael A. LaFerrara →
In Fight for Property Rights, Institute for Justice Tops “Pyramid of Moral Endurance”Why the Outrage Over Welfare for Strip Clubs?
Return to Top