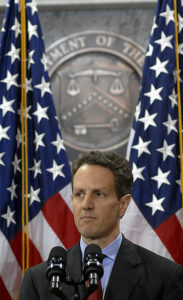 Yet Treasury Secretary Tim Geithner claims the federal government should forcibly confiscate more wealth from some citizens, as this is properly their “burden” for “the privilege of being an American.”

At least Geithner’s statement is clarifying. It shows that the welfare state that he and his “Progressive” brethren endorse—consisting of massive forced wealth transfers from those who earn wealth to those who don’t—is incompatible with individual rights and is, in principle, a system of involuntary servitude and, ultimately, slavery.

Appallingly, we already have a system of involuntary servitude. Geithner and company want to expand it.

What does that make them? What would it make you?

View all articles by Ari Armstrong →
Judge Tosses Rights-Violating Cigarette LabelsHappy Birthday, Dr. Seuss—And Thanks for My Love of Reading
Return to Top