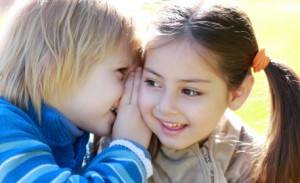 An almost-unbelievable story in The Sun claims that teachers at some UK schools have banned “best friends.” Harry Hawkins writes for that paper:

Teachers are banning schoolkids from having best pals—so they don’t get upset by fall-outs.

Instead, the primary pupils are being encouraged to play in large groups.

Educational psychologist Gaynor Sbuttoni said the policy has been used at schools in Kingston, South West London, and Surrey.

She added: “I have noticed that teachers tell children they shouldn’t have a best friend and that everyone should play together. They are doing it because they want to save the child the pain of splitting up from their best friend. But it is natural for some children to want a best friend. If they break up, they have to feel the pain because they're learning to deal with it.”

The story seemed so strange that I contacted Chris McGovern of the UK’s Campaign for Real Education; McGovern also was quoted in the story. He responded, “No one has questioned the veracity of this story. It simply reflects the state of our ‘education’ system. 1984 has arrived.” So for now I will take the story at face value, as bizarre and unbelievable as it seems.

While perhaps it was natural for McGovern to invoke the dystopian work of English author George Orwell, Ayn Rand’s dystopia Anthem (published in England more than a decade before 1984 came out) actually better-anticipates the “best friends” ban.

In Rand’s novella, a collectivist society has crushed individuality to the degree that the word “I” has been eliminated from the language and preferences among friends have been forbidden. Yet the central character of the story, Equality 7-2521, nevertheless develops a preference. He writes:

International 4-8818 and we are friends. This is an evil thing to say, for it is a transgression, the great Transgression of Preference, to love any among men better than the others, since we must love all men and all men are our friends. So International 4-8818 and we have never spoken of it. But we know. We know, when we look into each other’s eyes.

Equality 7-2521 goes on to fully embrace individualism and to see preference in friendships not as a transgression but as a reflection of his deepest moral and personal values. Hopefully his example will help to inspire and liberate school children of today who are forbidden to engage in the “Transgression of Preference.”