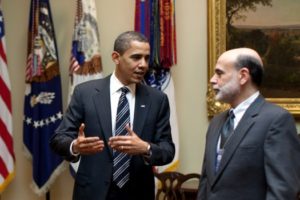 Federal Reserve chair Ben Bernanke is “one of the most powerful men in Washington,” notes the New York Times. Of course he is: He holds near-dictatorial powers over the nation’s money supply.

But limiting the government’s power to meddle in the economy is one of the great virtues of a commodity-backed currency.

That central banks' own policies might actually cause inflation, or contribute to the business cycle, or trigger crises, or blow-up asset bubbles—these are possibilities to which every economist worth his or her salt attaches some importance, if not overwhelming importance. But they are also possibilities that every true-blue central banker avoids like so many landmines.

But perhaps the most vivid demonstration of the destructive nature of the Fed is the falling value of the dollar.

According to “The Inflation Calculator,” a 2010 dollar had the same purchasing power as did four cents in 1910. The Fed’s printing of fiat money, which Bernanke desperately defends, has sunk the value of the dollar and promises more inflation in coming years.

Insofar as the Fed continues to exist, it should be required by law to return to and remain on a gold standard. Ultimately, though, as Yaron Brook of the Ayn Rand Institute points out, central banking and its fiat currency should be ended and replaced with free market banking and money.