Anticapitalist Lorax Succeeds . . . Thanks to Capitalism 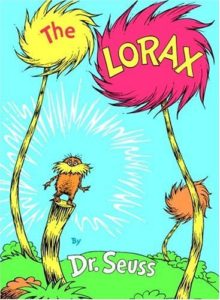 After two weekends in theaters, the film Lorax earned more than $120 million, reports Bloomberg Businessweek. That’s an impressive haul for a film condemning capitalism. But the irony is apparently lost on the filmmakers.

In the original Dr. Seuss story on which the film is based, a manufacturer chops down every last Truffula tree to use its “softer than silk” tufts to make “Thneeds,” an apparently worthless item that everyone nevertheless wants to buy. The manufacturer claims a Thneed can be used as a shirt, sock, glove, or hat, or put to a wide variety of other purposes. The Lorax, who speaks “for the trees,” remains skeptical of the the Thneed’s value, predicting (and vainly hoping) that “no one on earth . . . would buy that fool Thneed.”

The film expands the anticapitalist ideas of the original story. As Eric Felten explains for the Wall Street Journal, the film adds “a tyrannical tycoon, Mr. O’Hare, who opposes oxygen-producing trees because they compete with his bottled-air business.” As Iris Somberg suggests for Newsbusters, this element updates the story by “attacking plastics”: “Selling bottled air has long been the left’s analogy for how silly it is to sell bottled water,” she writes. As far as the environmentalist left is concerned, bottling water or air is just as useless—and just as harmful—as producing Thneeds.

Similarly, in discussing the themes of Lorax, author Peter Barnes describes capitalism as foisting mostly useless products on irrational consumers. He told the BBC: “If you look at all the advertising, all the crap that our economy churns out, most of it is thneeds, it's not stuff we actually need. It's stuff we're made to think we need.”

However, while the film characterizes capitalism as greed-driven destruction of the earth and mindless consumerism, the facts about capitalism justify precisely the opposite conclusions.

As Steven Horwitz points out for The Freeman, the destruction of valuable resources occurs not under capitalism—the system of individual rights, notably including property rights—but rather where property rights are not recognized or protected.

Where and to the degree it has been allowed to exist, capitalism, far from harming the environment in which people live, has radically improved it. For example, capitalism has replaced the filthy smoke and manure that once typified daily life with electricity, clean-burning natural gas, and modern automobiles.

Far from promoting mindless consumerism and worthless products, capitalism has enabled producers to create and sell life-enhancing products including abundant food, cell phones, computers, airplanes, and MRI scanners. Capitalism has brought prosperity to the masses, increased life expectancy from less than 40 years to nearly 80, and enabled the human population to grow from less than a billion people to more than seven billion today.

Capitalism even made possible the printing of the Lorax book, notably, on tree pulp; the manufacture, distribution, and projection of the Lorax film, which required massive amounts of petroleum and electricity, not to mention contracts, property rights, rule of law, and countless other elements of capitalism; and the transportation of the millions of people who went to see the film, which required more of the same.