The night after Andrew Breitbart died, I watched an episode of Red Eye w/Greg Gutfeld in which Gavin McInnes told a delightful story about Breitbart. In an earlier episode of Red Eye, Gutfeld and McInnes had been mocking the idea of Donald Trump sponsoring a GOP debate. As McInnes retells it:

Greg and I had the knee-jerk reaction of scoffing at the whole thing. When Breitbart asked us what was so funny we said, “Well, it’s obviously just some rich guy showboating.” Then he taught me a word I never really paid attention to before: “So?”

This word defines Breitbart to me more than any other. At a bar one night I was whining about the allegation that all libertarians are funded by the Koch brothers. “So?” he replied. Andrew didn’t play the PC left’s game. Libertarians don’t get magical checks from the Koch brothers, but so what if they did? George Soros spends billions paying people he likes. There’s nothing wrong with that, either. 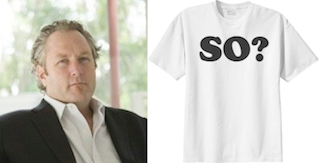 “So?” is a beautiful question. It calls for people to ground their assertions in something that rationally matters—and, ultimately, things rationally matter only insofar as they can be shown to impact human life or the requirements thereof, such as thinking, pursuing values, producing wealth, and protecting individuals’ rights to life, liberty, property, and the pursuit of happiness.

The question “So?” profitably applies to more areas of life than politics and economics; but, for the sake of brevity, I’ll limit my examples here to those fields. Observe where the discussion goes when the question is posed in response to assertions such as these:

The question points the discussion to fundamentals:

The question “So?” directs a given discussion to the underlying and relevant facts of the matter, the facts by reference to which any important issue should be evaluated. It makes people check their premises.

As he told the story about Breitbart on Red Eye, McInnes was wearing a t-shirt that read, “So?”—and he’s now selling these shirts and giving all the proceeds to Breitbart’s family. This is a worthy charity, as Breitbart left behind a widow and four children, and, as McInnes explains, Breitbart was not rich:

He went to every Tea Party rally and most OWS rallies. His work employed dozens of people but every time he made some money, he poured it back into his websites. He was also plagued by lawsuits. This isn’t throwing some money at a millionaire. It’s an attempt to give a grieving family one less thing to worry about, if only for a moment.

I bought a “So?” shirt and plan to wear it liberally. I also plan to make “So?” a staple question when premises need checking.

Although I disagreed with Breitbart on certain issues (who didn’t?), he was by any rational measure a great man. He tirelessly exposed nefarious programs and tactics of the left; he dramatically changed media and journalism for the better; he feared nothing; and he was an unabashed lover of life.

Here’s Red Eye’s tribute to Breitbart, which is well worth watching: