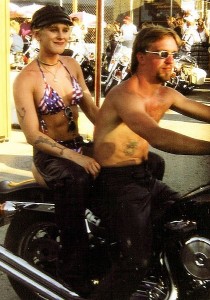 Had Colorado House Bill 1128 become law, owners of private restaurants and other businesses “offering wholesale or retail sales to the public” could have been subjected to criminal and civil penalties for discriminating against the “unconventional attire” of bikers, regardless of whether that attire was clean, appropriately concealing, and tasteful—or filthy, excessively revealing, and graphically disgusting.

This may sound like a story from the Onion or an episode of the Twilight Zone. Alas, it is not.

And the bill would have done far more than override businesses owners’ dress codes; it would have subjected owners to capricious legal actions. Say a restaurant owner kicked out a biker because he smelled foul, disturbed other diners, or in some other way disrupted the business. Had the bill become law, the biker could have trigger legal action merely by claiming the restaurant owner “discriminated” against the biker’s “unconventional attire.” Notably, each violation of the statute would have carried a possible misdemeanor charge with the possibility of fines or a year-long jail sentence (see the related statute).

Ridiculously, the sponsor of the bill, State Representative Joe Miklosi, claimed his bill was about freedom. “I’m a First Amendment disciple,” he told CBS4; “I want to make sure [bikers are] not judged by their attire when they walk into an establishment to buy a burger.”

The First Amendment, of course, protects freedom of expression in the context of all the rights protected by the Constitution. If Miklosi read even a bit further into the First Amendment alone, he would see that this Amendment also protects freedom of association—a freedom his bill violates even more blatantly. [Update: While the First Amendment's reference to the “right of the people peaceably to assemble” was arguably intended to protect public meetings of a political nature, the broader principle on which free assembly rests is the right to associate by mutual consent. At any rate, the point remains that Miklosi misinterpreted the right of expression by stripping it from the broader context of rights. —AA]

The First Amendment means that you are free to express yourself using your own resources, not using the resources of others against their will. You have a right to speak freely, but you have no right to barge into my house and deliver an address. Nor do bikers have a right to express themselves in private establishments against the wishes of the owners of those establishments.

This bill did not pass (as the Denver Post reports); America is not that far gone (yet). But the mere fact that a legislator crafted this bill and that other legislators, journalists, and pundits seriously considered it indicates the frightening extent to which rationality and liberty have eroded in America.

America needs to come to its senses and leave the absurdities to the pages of the Onion.

View all articles by Ari Armstrong →
Write Us a Song, and That’s Lucky TooAndrew Breitbart’s “So?”—A Great Question and Now a Worthy Charity
Return to Top