Should a “homosexual contract” be called something other than marriage? 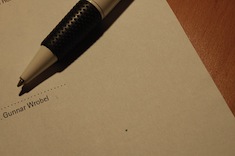 Following my recent post, Message to Gov. Christie and His Critics: Gay Marriage is a Moral Right, a reader commented:

Government should be out of the marriage business; then all contracts between individuals need not be restricted. However, with government involved as it is, and given all the laws that incentivize man/woman marriage (e.g. for population growth), wouldn't a better solution be to call homosexual contracts something else while not restricting their rights?

If "marriage" has any rational meaning specifc[ly] for man/woman relationships, then the definition cannot change and gays do not have a right to "marry."

Definitions can and must change and evolve to reflect newly discovered facts or instances of essentially similar phenomena. In regard to the meaning of marriage, it is now a recognized fact that two consenting adults of the same sex can and sometimes do form emotional, sexual, and financial bonds in the same way as heterosexual couples. Of course, there are differences between gay and heterosexual relationships, but they are irrelevant to the basic meaning and purpose of marriage. Common usage has already and properly adapted to include gay marriage as an instance of marriage, For example, Merriam-Webster now defines marriage as follows:

Expanding “marriage” to include the essentially similar contracts of same-sex couples does not in any way undermine or disparage the traditional meaning of the concept. It simply recognizes the essential similarities at hand.

View all articles by Michael A. LaFerrara →
A Vital Truth for Valentine’s Day: Say’s Law and Romantic LoveOil Shale Politics Points to Problems of Federal Land Ownership
Return to Top