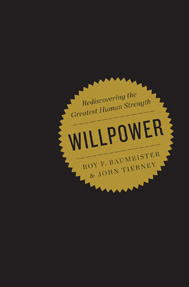 Roy F. Baumeister started his career in psychology skeptical that such a thing as willpower even exists. لعبه بلاك جاك In this, he says, he did not differ from many other psychologists and philosophers.

But then he observed willpower in the laboratory: how it gives people the strength to persevere, how they lose self-control as their willpower is depleted, how this mental energy is fueled by the glucose in one’s bloodstream. He . . . discovered that willpower, like a muscle, becomes fatigued from overuse but can also be strengthened over the long term through exercise. (pp. 1–2)

In Willpower: Rediscovering the Greatest Human Strength, Baumeister and coauthor John Tierney detail the experiments Baumeister conducted in his laboratory, share the results, and highlight their implications. The result is a fascinating and useful, if sometimes maddening, book—one that shows how using willpower effectively is essential to achieving “a happy family, good friends, a satisfying career, robust health, financial security, [and] the freedom to pursue your passions” (p. 1).

In one of the experiments detailed in the book, a group of hungry college students entered Baumeister’s laboratory and immediately smelled the aroma of freshly baked chocolate chip cookies.

The experimental subjects sat down at a table with several culinary choices: the warm cookies, some pieces of chocolate, and a bowl of radishes. Some students were invited to eat the cookies and candy. The unlucky one’s were assigned to “the radish condition”: no treats, just raw radishes.

To maximize temptation, the researchers left the students alone with the radishes and the cookies, and observed them through a small, hidden window. تعليم البوكر للمبتدئين The ones in the radish condition clearly struggled with the temptation. Many gazed longingly at the cookies before settling down to bite reluctantly into a radish. Some of them picked up a cookie and smelled it, savoring the pleasure of freshly baked chocolate. العاب المال A couple accidentally dropped a cookie on the floor and then hastened to put it back in the bowl so no one would know of their flirtation with sin. But nobody actually bit into the forbidden food. The temptation was always resisted, if in some cases by the narrowest of margins. All this was to the good, in terms of experiment. It showed that the cookies were really quite tempting and that people needed to summon willpower to resist them.

Then the students were taken to another room and given geometry puzzles to work on. The students thought they were being tested for cleverness, although in fact the puzzles were insoluble. The test was to see how long they’d work before giving up . . . (pp. 21–22)

As it turned out, the students who had been permitted to eat cookies and thus did not have to summon willpower to resist them worked for about twenty minutes on the geometry problems—as did a control group that wasn’t offered any food at all. The radish eaters gave up in just eight minutes. . . .

View all articles by Daniel Wahl →
Review: Objective Economics, by M. Northrup BuechnerReview: Your Brain at Work, by David Rock
Return to Top