Review: If I Die in the Service of Science

If I Die in the Service of Science: The Dramatic Stories of Medical Scientists Who Experimented on Themselves, by Jon Franklin and John Sutherland, MD. New York: Authors Choice Press, 2003. 320 pp. $22.95 (paperback). 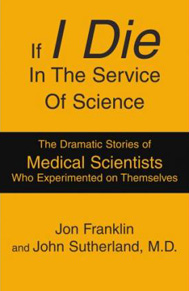 Professor Max Pettenkofer held up a flask containing deadly cholera bacteria. The rapt attention of the students gathered all around him was unsurprising, for the professor had raised the flask in a toast, about to drink it.

Pettenkofer did not believe that he would die. Contrary to the opinions of many scientists, he thought that the billion or so bacteria inside the flask would cause cholera only under certain conditions, conditions that were not present in his experiment. ماكينات القمار The experiment, he thought, would prove that he was right and that the theories held by others were wrong, settling the issue resolutely. كازينو على الانترنت Convinced of the importance of what he was about to do, Pettenkofer made sure that the words he said next were written down:

Even if I be mistaken and this experiment that I am making imperils my life, I shall look death quietly in the face, for what I am doing is no frivolous or cowardly act of suicide, but I shall die in the service of science as a soldier perishes on the field of honor. (p. 178)

With that, Pettenkofer put the flask to his lips and drank.

As to what happens next, you’ll have to read for yourself. تكساس بوكر The conclusion to that experiment and those of several others of its kind are presented in If I Die in the Service of Science: The Dramatic Stories of Medical Scientists Who Experimented on Themselves. Written by two-time Pulitzer winner Jon Franklin and John Sutherland, MD, the book covers the stories of eight medical scientists who put their lives at risk to advance their chosen fields. . . .

View all articles by Daniel Wahl →
Review: The Killer of Little Shepherds, by Douglas StarrReview: Obit, by Jim Sheeler
Return to Top