Review: The Closing of the Muslim Mind, by Robert R. Reilly 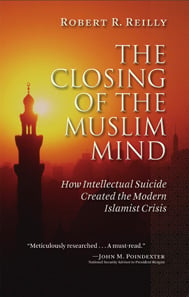 About the Muslim Middle East, Robert R. Reilly, author of The Closing of the Muslim Mind, says, “I am trying to understand the situation as it is and the reasons for it. I am simply offering the conclusions to which I have come after searching for years to make sense of what I have seen, experienced, and read” (p. 9).

Reilly worked in the Near East/South Asia section of International Security Affairs in the Office of the U. S. Secretary of Defense and interviewed Middle Eastern Muslim students while teaching at the National Defense University in Washington, DC. Drawing from these experiences and a wide range of literary sources, Reilly, in The Closing of the Muslim Mind, explores the historical and philosophical origins of the mostly dysfunctional society of today’s Muslim Middle East and then suggests paths that Muslim reformers might take.

Reilly’s account of the roots of the problems involving Muslims in the Middle East—and the threats they pose to the West—generally proceeds as straight as a railway track from the anarchic society in which Muhammad (570–632 CE) fought, to the Middle East today, with all of its failures, including the eruption of Islamism, the “Muslim totalitarian ideology” (p. 175) that has in modern times sprouted from the religion of Islam. As the subtitle—How Intellectual Suicide Created the Modern Islamist Crisis—suggests, the main point of the book is to demonstrate a cause and effect relationship between old ideas and the present state of the Muslim world.

This book is about one of the greatest intellectual dramas in human history. Its landscape is the Muslim mind. How man regards his powers of reason has been a decisive influence on the shape and destiny of civilizations, including the Islamic one. . . .

This is the story of how Islam grappled with the role of reason after its conquests exposed it to Hellenic thought and how the side of reason ultimately lost in the ensuing, deadly struggle. . . . (p. 1)

Throughout, Reilly distinguishes between fundamental ideas and consequential ideas. He argues that certain fundamental ideas have caused other ideas, which in turn have led to individual actions and attitudes ranging from shunning scientific studies to support for jihadism. “What may seem abstruse theological points can have the most practical and devastating consequences” (p. 5). . . .

View all articles by Burgess Laughlin →
Review: Your Brain at Work, by David RockReview: The Killer of Little Shepherds, by Douglas Starr
Return to Top