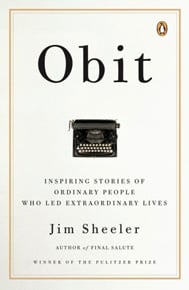 It’s a pleasure to read Jim Sheeler writing about the dead.

Consider how Sheeler, an obituary writer for the Denver Post and Boulder Planet newspapers during the 1990s, wrote “After 624 Deaths, One More,” his obit for Carolyn Jaffe. He shines a light on the techniques Jaffe used in her work as a hospice nurse who helped hundreds of patients come to terms with their mortality, and turns up the brightness on the enrichment she derived from her career by using this quote from a book she coauthored:

I know I’ve made the time better. I’ve changed the dying from something that’s feared, something that’s the enemy, to a natural part of life—maybe even a friend. The families tell me this, and I know it without their saying a word. This is powerful; it is beautiful. (p. 208)

In his obituary writing, Sheeler adopts a similarly positive approach to death, conveying the power and beauty of a life well lived. Obit: Inspiring Stories of Ordinary People Who Led Extraordinary Lives, a compilation of Sheeler’s newspaper work, demonstrates that—whether the subject is a senior whose end was imminent, a heartbroken suicide, or a youth who met an untimely demise—obituaries can and should touch upon the essence of their subjects’ lives; that is, the distinctions and values that fundamentally defined them. Moreover, as Sheeler writes in his introduction and demonstrates in his work, the stories of people who never made the newspapers in life oftentimes hold valuable lessons. His guiding light is to pursue, uncover, and underscore such lessons: “When interviewing friends and relatives, one of the questions I always ask is, ‘What did you learn from this person’s life?’”His subjects are those who, as he puts it, “teach me how to live” (p. ix).

In an obit titled “Life’s Lessons Learned Too Soon,” Sheeler uncovers the values that guided Daniel Seltzer, a fifteen-year-old who died suddenly of complications from a previously undetected heart condition. Sheeler remembers Daniel’s commitment to living a thoughtful, ethical life; his passionate pursuit of knowledge (he learned the alphabet at age two and how to read soon after); and how he later parlayed his love of upgrading and fixing computers into a business. As he writes about Daniel’s life and interests, Sheeler highlights eleven guidelines from the teen’s own “Code of Morals”—among them “Never allow fear to run one’s life,” “Know one’s own limitations,” and “Never allow anger to cloud one’s own judgment”—and uses these as quasi-headlines to segment the obit. . . .

View all articles by Joseph Kellard →
Review: If I Die in the Service of ScienceWashington Guided the Constitutional Convention
Return to Top