Review: The Killer of Little Shepherds, by Douglas Starr 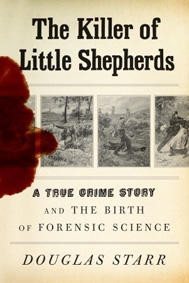 One day, in 1893, while taking a walk, nineteen-year-old Louise Barant met a slightly older man named Joseph Vacher (pronounced Vashay). After he asked about the weather, they went to a café, where, much to Louise’s surprise, Vacher proposed marriage. He added that if she ever betrayed him, he’d kill her.

In the following weeks, she tried to avoid him but to no avail. She told him that her mother forbade a relationship between them, but he persisted. Finally, she fled to the safety of another town. But Vacher soon showed up there and asked her once again to be his bride. When she refused, he pulled out a gun, shot her, and turned the gun on himself.

Because the person who sold Vacher the gun had loaded it with half charges, neither died from the bullet wounds, but the faces of both were disfigured. Vacher’s face was so disfigured that when he spoke it contorted into a disturbing grimace. In this condition, he was sent to an asylum far away from Louise.

In The Killer of Little Shepherds: A True Crime Story and the Birth of Forensic Science, Douglas Starr explains what happened in the years leading up to the shooting and what happened when, ten months later, the asylum’s guards opened the wrought-iron gates and set Vacher free.

Vacher’s ensuing rampage was one of the bloodiest of any serial killer in history. Newspapers would later describe his release as “opening the door to the cage of a wild beast” (p. 14). Starr shows that the analogy was apt.

However, as the book’s title indicates, Starr does not focus exclusively on Vacher. Instead, he oscillates between scenes of Vacher prowling the countryside and those of intelligent, methodical men solving crimes (Vacher’s and others) using the latest scientific techniques.

Starr focuses on one scientist in particular: Dr. Alexandre Lacassagne (pronounced Lackasanya), one of the most respected criminologists of his time. In all of France, writes Starr, “there could not have been two men more different than Joseph Vacher and Alexandre Lacassagne.” . . .

View all articles by Daniel Wahl →
Review: The Closing of the Muslim Mind, by Robert R. ReillyReview: If I Die in the Service of Science
Return to Top