Review: Your Brain at Work, by David Rock - The Objective Standard

Review: Your Brain at Work, by David Rock 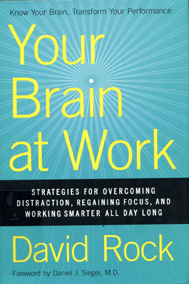 Anyone eager to increase his mental productivity will do well to read David Rock’s Your Brain at Work: Strategies for Overcoming Distraction, Regaining Focus, and Working Smarter All Day Long.

Each chapter has many tips that you can put to use right away to get more and better work done. And the setup is not just clear and entertaining but also memorable.

Take, for example, Rock’s metaphor for the prefrontal cortex, the most recently evolved part of the human brain and the part that enables one to plan, decide, and solve problems:

Think of the prefrontal cortex as a stage in a small theater where actors play a part. The actors in this case represent information that you hold in your attention. Sometimes these actors enter the stage as a normal actor would, from the side of the stage. This is the case when information from the outside world comes to your attention. . . .

Using this metaphor, Rock shows how the five functions making up most of your thinking relate.

Once actors get on the stage of your attention there are lots of interesting things you can do with them. To understand a new idea, you put new actors on the stage and hold them there long enough to see how they connect to audience members—that is, to information already in your brain. . . . To make a decision, you hold actors onstage and compare them to one another, making value judgments. . . .

To recall information, meaning to bring a memory from the past back up to your mind, you bring an audience member up on the stage. If that memory is old, it might be at the back of an audience, in the dark. It can take time and effort to find this audience member, and you might get distracted along the way. . . . To memorize information, you need to get actors off the stage and into the audience. . . .

Sometimes it’s important not to focus on an actor, to keep him off the stage. . . . [This] process of inhibition, of keeping certain actors off the stage, requires a lot of effort. (p. 7)

This extended metaphor makes the information Rock later shares much easier to digest.

For example, when he shares studies showing that this “stage” (i.e., the prefrontal cortex) requires energy, of which everyone has a limited supply, you can more easily see the importance of conserving your mental capacity by carefully controlling which of its functions you use and when. Similarly, when he points out that “the stage” can only hold so many “actors,” that “the actors” themselves can only play one role at a time, and that they’re “high maintenance” to boot, you can more easily see the importance of limiting your focus to what is essential (i.e., single-tasking) and of knowing not just what you are doing but why.

The extended metaphor also makes Rock’s recommendations far easier to remember, especially when you sit down at your desk overwhelmed by a full inbox and seemingly far too little time to get even a fraction of it done.

Your Brain at Work is itself organized like a play. The first two sections—or “acts”—concern the brain and discuss new research, draw implications, and give specific, helpful suggestions along the lines of those indicated above. Following the first two “acts” is an “intermission” in which Rock discusses the importance of observing your brain at work. After the “intermission,” another two acts show how you can use different facts he highlights about the brain and its functioning to better work with or communicate with others—by keeping in mind, for example, how those others are motivated.

A unique attribute of the book, one that further sets it apart from other books on mental productivity (which often resemble checklists of mental “to-dos”), is that Rock presents both useful techniques and tips for effectively employing them.

For example, in his “intermission” Rock repeatedly emphasizes the importance of observing your brain at work. Extending his stage metaphor, Rock calls the brain’s capacity to observe itself working “the director.” According to Rock, you are acting as “the director” when you notice “your stage being too tired to function, your stage getting too full, your stage needing to wake up, or your stage needing to switch off to allow an insight to get through” (p. 95). Without strong directorship, Rock says, his earlier information about improving brain functioning might not help at all. “Peak mental performance requires a combination of the two—knowing your brain and being able to observe your brain processes occurring” (p. 87). As the book proceeds, Rock repeatedly loops back to this section, showing how observing one’s mind at work is important in labeling and reappraising emotions and in working with others toward solutions.

Rock uses this spiraling process throughout the book to great effect. He also places short narratives at the start and end of each section concretizing the lessons learned and adding even more to the immense value of this book.

The book has a few flaws (e.g., Rock attributes to everyone a predominant focus on other people). But Your Brain at Work is remarkable for the quantity and quality of theory it provides on mental productivity, theory that is good precisely because it works so well in practice.

View all posts by Daniel Wahl →
Review: Willpower: Rediscovering the Greatest Human StrengthReview: The Closing of the Muslim Mind, by Robert R. Reilly
Return to Top