Review: The 7 Principles of Zionism, by Dan Illouz 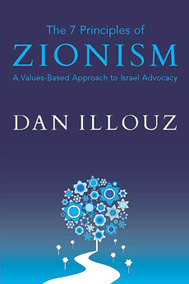 Given that Israel’s legitimacy is regularly questioned in the media, a short book providing well-reasoned moral arguments defending Israel would be a useful addition to the library of any serious advocate of the state. Unfortunately, in The 7 Principles of Zionism: A Values-Based Approach to Israel Advocacy, Dan Illouz focuses primarily on the collectivist and nonessential historical arguments for Israel as the realization of “Jewish statehood” (p. 30) and spends few pages presenting genuine, objective moral arguments for its legitimacy.

Illouz presents the case for Israel from the perspectives of “Historical Justice,” “Legal Justice,” “Peace,” “Truth,” “Liberty and Freedom,” “Democracy,” and “Hope”—all of which serve as chapter headings in this short book. It is clear that Illouz believes the most significant argument in defense of Israel is from the perspective of historical justice, which he says is of “extreme importance” (p. 14). “In order to build an ethical defense for the State of Israel,” he writes, “one cannot ignore the historical circumstances that lead to the building of the modern state of Israel” (p. 11).

Illouz is at pains to prove a physical and spiritual connection between the Jewish people and the land of Israel, going so far as to present what he regards as archaeological evidence of the connection, including the following:

The City of David is one of the most incredible archeological finds in the world. . . . In the first dig, Charles Warren found Hezekiah’s Tunnel. An ancient Hebrew inscription, the Shiloah Inscription, was found in this tunnel. . . . This find, as well as numerous others . . . show that this was the location of ancient Jerusalem and that this was a Jewish city. (pp. 16–17)

In addition, he quotes prayers from the Bible, offers historical poems, and provides other Jewish sources to illustrate the deep connection Jews have to the land over the many centuries of exile. Illouz cites, for example, this prayer recited at weddings by Jewish grooms throughout history:

If I forget thee, O Jerusalem, let my right hand wither, let my tongue cleave to my palate if I do not remember you, if I do not set Jerusalem above my highest joy. (p. 23) . . .

View all articles by Gideon Reich →

Review: Eames: The Architect and the PainterReview: Treason, by Ann Coulter
Return to Top